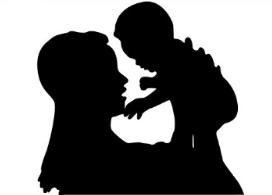 Today I am going to discuss a topic that is near and dear to every Muslim’s heart; a creation of Allah that is not only beautiful but also selfless in every aspect of the word. I’m sure everyone knows who I’m talking about- our mothers.
A mother’s love is inarguably one of the most beautiful phenomenon of nature. For one, it is eternal and unconditional. In fact, the maternal bond forged between a mother and her child at birth is the first attachment an individual forms in their lives which not only has an enormous influence in their physical development but also determines their psychological stability throughout all stages of life.
From the time a mother conceives till the time she gives birth, all her waking moments are spent stressing over her child’s optimal care and comfort. Allah (SWT) meticulously outlines in the Quran the seven stages of Creation of an embryo within the mother’s uterus,
“And certainly did We create man from an extract of clay. Then We placed him as a sperm-drop in a firm lodging. Then We made the sperm-drop into a clinging clot, and We made the clot into a lump [of flesh], and We made [from] the lump, bones, and We covered the bones with flesh; then We developed him into another creation. So blessed is Allah, the best of creators.” (Quran 23:12-14)
For the nine months a mother carries her child, she pays special attention to her nutrition and lifestyle and refrains from indulging in any activities that might harm her baby. During this time, her body undergoes multiple changes, both physical and hormonal to accommodate the needs of the growing foetus, the most prominent of which is an increased escalation in weight, nausea, random cravings and heartburn. The influx of estrogen and progesterone influence the functioning of other hormones and often cause mood swings. Pregnancy also alters the sensory reception and often produces long periods of lethargy, a fact that the Quran confirms “…his mother carried him, [increasing her] in weakness upon weakness.” ( Quran 31:14).
A mother bravely endures the discomforts of pregnancy and labor pangs to bring to the world, the life she has been nurturing for nine months because of her profound love. During this time, her body undergoes another transformation, this time to cater to her born baby. Breastfeeding begins during the first hour of the baby’s life and continues until the age of two, “Mothers may breastfeed their children two complete years.” (Quran 2:233). This maternal concern doesn’t terminate at adolescence when an individual is capable of making and being held accountable for their own decisions but continues throughout her life.
A mother performs the role of a teacher, a caregiver, a doctor and a chef and a counselor, all in one. In fact, all of her actions are a manifestation of the love she has for her child. This is why young children often associate feelings of peace and serenity with their mothers. They tend to feel safe around them and instinctively trust them more than anyone else. A mother is a child’s first best friend, their most trusted confidant, their first role model and generally their go-to person for all kinds of issues. When we think back to our childhood, all our memories are subconsciously woven around our mother.
A mother’s status is so eminent that it has been given exceptional attention in Islam. In a Hadith narrated by Abu Hurairah (RA), Prophet Muhammad (SAWS) said, “Your mother, again your mother, again your mother, then your father, then your nearest relatives according to the order (of nearness)” when he was questioned about who deserves the best treatment. [Sahih Muslim, Book 45, Hadith 2] In another Hadith our beloved Prophet Muhammad (SAWS) is reported to have said that “Paradise lies under her feet.”  This shows that obedience to mothers guarantees a ticket to Jannah.
A mother will sacrifice her comfort in a heartbeat for her child. She will give up her sleep just so that her child sleeps peacefully. She will forgo her own dreams just so her children can fulfill theirs. Aisha (RA) narrated an incident in her life when a woman with two young kids came to her doorstep to ask for food. She gave her three dates which was all the food in her house. The woman distributed them between her children and kept one for herself but when she saw the hunger in her kids’ eyes, she couldn’t bear it and she broke her date in half and gave one piece to each child.
How many times have our mothers sacrificed their desires just so they could have the satisfaction of seeing us smile? The answer is probably along the lines of too many times to count. This is why our mothers deserve so much more than just a day set aside for them in a whole year to celebrate their love. This is why the deserve so much more than just flowers and a card to honor their sacrifice. This is why they deserve so much more than just a phone call or a post card once a month to send them regards. Our mothers have such a great right on us that even if we were to spend our whole life trying to repay their debt we wouldn’t even come close to a fourth of all she has done for us.
May Allah (SWT) bless us with the Taufeeq to respect our parents and be a source of pride and sadqa-e-jaariyah for them.

“My Lord, have mercy upon them as they

brought me up [when I was] small.”

0 thoughts on “A Mother's Love”