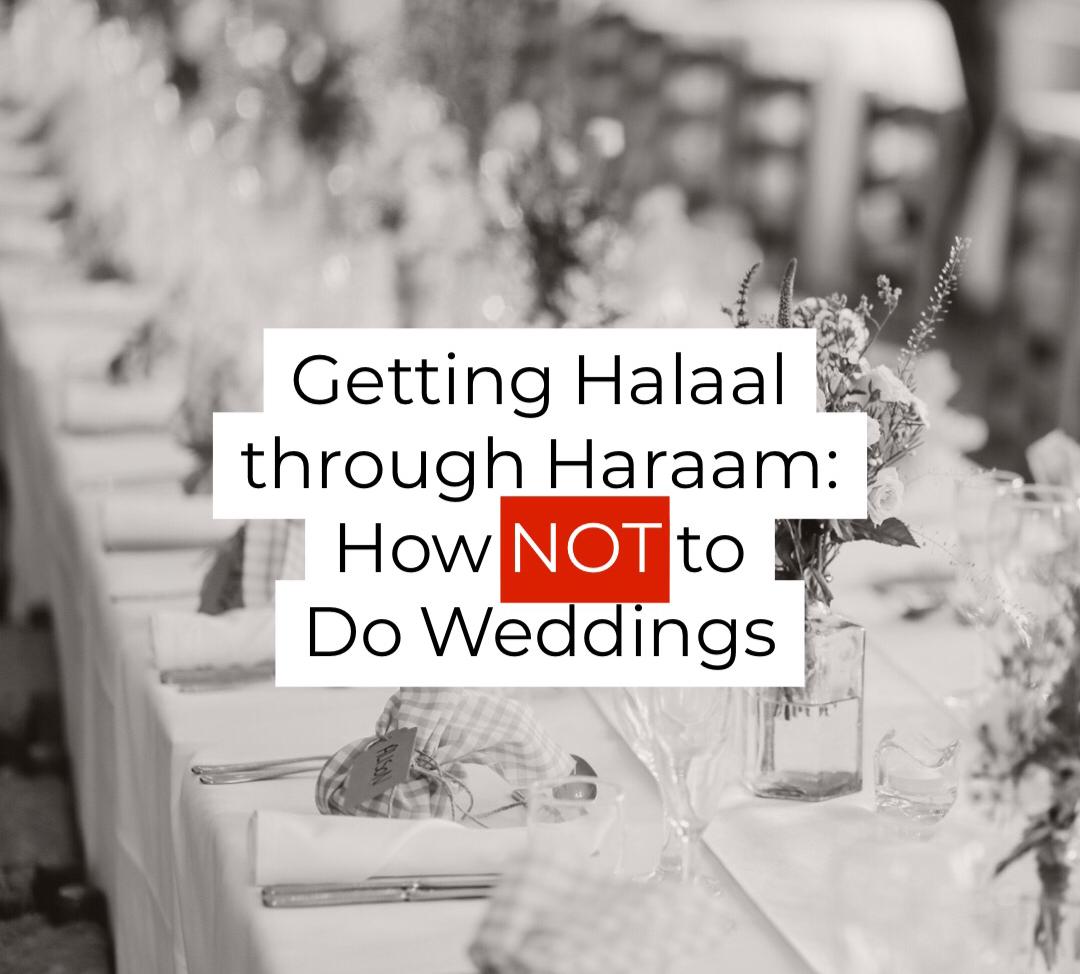 Marriage is a sacred union between two people who are destined to be together since long before the heavens and the earth came into existence. While a man and a woman may keep themselves chaste and seek the halaal means to get married, they can often get trapped in the vicious circle of lavish weddings and functions once the marriage is fixed. Islam has no place for such extravaganza and it leads to the disobedience of the One who helped man find the perfect life partner. Following is a comprehensive analysis of certain elements in weddings that are haraam and how we can identity and rectify them.

Hijab
While the chairs and tables are covered and you can’t see a splinter of wood or metal they maybe made of, the ladies – the Muslim women- could be seen devoid of any head dress or modest clothing. The mixing of both the genders in illogical customs, even after segregated arrangements, is very common, especially in Asian countries.

In order to avoid such haraam occurrence, firstly the bride and groom should agree with the simple Sunnah method of marriage. That, in itself, will eliminate all the customs and traditions that lead to such immorality which is mainly adopted from non-Muslim marriage ceremonies. Secondly, the invitation can be specific with the Muslim dress code for the invitees, males and females, which will encourage them to adopt proper hijab and modest clothing, Bi idhnillahiTa’ala.

Dowry
The corrupt tradition of dowry has become a means of preserving one’s status in the society in the present era. A father is forced to take huge loans in order to purchase all the essentials of homemaking for his daughter, so she can live happily at her in-laws and never be taunted regarding the same. The given name of “gifting our daughter” for such a horrendous practice has claimed many lives. A dowry is supposed to be given by the man to his wife and only as much as he can afford. As Allah ﷻ says in the Qur’an,

“And give to the women (whom you marry) their mahr (obligatory bridal money given by the husband, to his wife, at the time of marriage) with a good heart…”
[4 :4]

Also, it is the responsibility of the man to maintain the needs of his wife and house completely.

Wastage of food
In order to compete with the societal norms, people tend to have large menus with lavish cuisines in huge amounts. This results in a high percentage of food that goes into the waste as people try to fit all the varieties just so that they don’t miss out on any better dish. And how much can a stomach hold! Obviously, they recklessly throw them out, while millions sleep on hungry stomachs around the world.

Allah ﷻ says in the Qur’an,

“O children of Adam! Attend to your embellishments at every time of prayer, and eat and drink and be not extravagant; surely He does not love the extravagant.”
[7:31]

The solution to this wastage is to stop competing in the menus of the wedding functions and to try and have the minimum amount of food that will suffice to feed all the invitees- especially the poorer section of the society that should get to eat along with the invitees, and not simply be the receivers of the leftovers.

Jabir (May Allah be pleased with him) reported that the Prophet  ﷺ said,

“When one of you eats his meal and a morsel falls down, he must pick it up and remove the doubtful portion and eat the rest. He must not leave it for the devil.”
[Jami’ Tirmidhi, authenticated by al-Albani]

Music
The use of music on the most important day of a person’s life, when he or she must be listening to or reading the Qur’an, seeking abundant blessings and the pleasure of Allah, is very common nowadays. Maybe, the only time the guests and hosts listen to the verses of the Qur’an the whole day is when the Khutba of the Nikah starts.
Music in any form is haraam in Islam, except for the use of the ‘duff’ which is permissible with conditions.
When is it permissible to beat the duff

Allah says, admonishing the listeners of music and songs,

“Do you then wonder at this recitation (the Qur’aan)?
And you laugh at it and weep not, wasting your (precious) lifetime in pastime and amusements (singing).”

Negligence of prayers
Due to the innumerable ceremonies of a wedding, people tend to miss the obligatory Salaah. Even the bride and the groom are so busy in dressing-up and make-up; there is no time, nor room even for a single Sajdah.
Salaah will be the first and the most important question on the Day of Reckoning, and it is not to be missed, even on a day as busy as the wedding day.

“Between faith and unbelief is abandoning the prayer.”
[Sahih Muslim]

Keep your Salaah on time; rest of your affairs will be taken care of by the Almighty ﷻ, In shaa Allah.
If these practices are sincerely avoided, and if we try our best to follow the Sunnah of Rasool-Allah ﷺ during the wedding ceremony as we do in following his Sunnah when deciding to marry, then surely the marriage will be a union of  blessings showered upon by the Almighty Allah ﷻ.

0 thoughts on “Getting Halaal through the Haraam?”