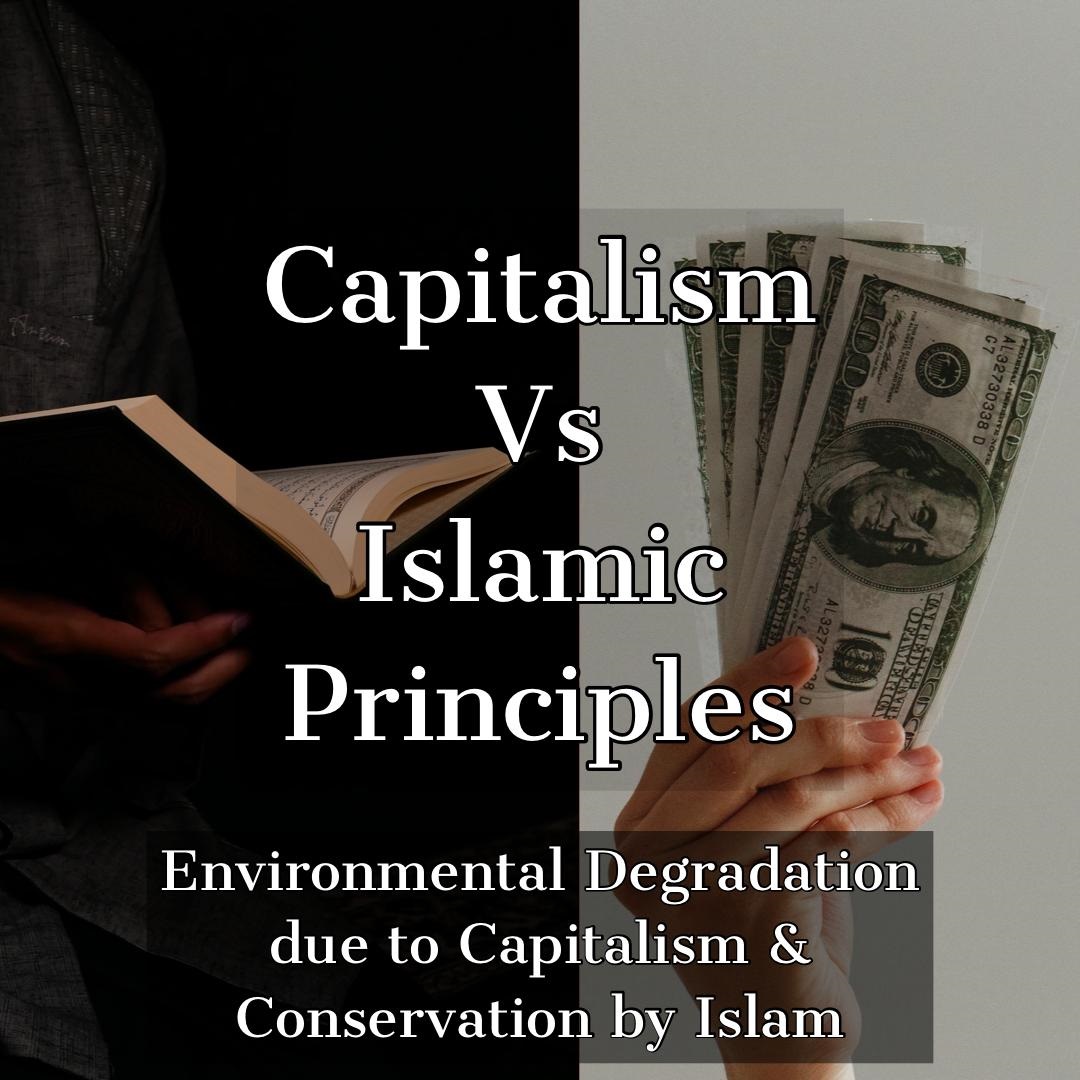 Environmental Degradation due to Capitalism and Conservation by Islam

Capitalism is defined by the Oxford dictionary as a system by which a country’s trade and industry are controlled by private owners. Capitalism includes all gigantic industries and firms that run major parts of the economy. These industries have provided jobs and developed countries around the world. Capitalism has led to economic growth by combating hunger and poverty. Started in the 16th century, capitalism seems to have reduced poverty by 10 % since the 1800s. It started with a bang after the depressing, deadly plague of Europe, and it continues to run strong in today’s world.

Capitalism and its Relation to the Environment

Although capitalism seems to have boosted economic growth, benefitting people, it has its major downfalls. Ever since the beginning of industrialization, the environment has been affected devastatingly. Capitalistic beliefs are based upon making profits, using and misusing everything available. This apathetic attitude has led to nothing but extinction and demolition. Its greed has resulted in innumerable acts of environmental vandalism such as deforestation, industrial smoke pollution, depletion of natural resources, and dumping of toxic waste into the ocean, rivers, lakes, etc.

Ultimately, this has resulted in unchangeable environmental conditions like acid rain, ozone layer depletion, pollution of all sorts (air, water, etc.), extinction of animals and natural resources, and most importantly, global warming.

The impact of capitalism on climate change is relatively apparent. Summers, being the hottest periods of the year, lead to disasters such as forest fires, like the recent fire that occurred earlier this year in Australia, and the ongoing fire in California. The heat has also provoked the melting of glaciers in the Himalayas, Greenland, and the Antarctic region. As for winters, climate change has resulted in a decrease in rainfall, an increase in smog, floods, and an uncertain warmness.

This entire destruction is a well known by-product of capitalism that aims for profit, and this needs to be put to a stop, permanently.

Islamic Principles – The Opposite of Capitalism

Excessiveness is the other name for capitalism; there is excessive use of natural resources, excessive toxic waste, excessive deforestation, excessive industrial smoke, etc., only to make excess money. Islam strictly abhors such excessiveness. Allah ﷻ states in the Qur’an,

“….And be not excessive. Indeed, He does not like those who commit excess.”

This verse quite clearly describes Islam’s loathing towards capitalism, which is nothing but excessiveness and extravagance.

Although Allah ﷻ has provided us with these environmental resources, it does not give us the liberty to misuse them for economic gain, as Allah ﷻ says,

“And cause not corruption upon the earth after its reformation…”

“…And desire not corruption in the land. Indeed, Allah ﷻ does not like corrupters.”

By reflecting upon these verses, one can link these to the corruption at industrial practices, where the entire environment is disrupted by capitalistic greed and hostility.

Islamic Solutions to Preserve the Environment

Despite the modern solutions and preservation methods, many people, including Muslims, are not ready to bring about a change. But the Islamic principles that provide solutions to conserving the environment, although 1400 years old, are applicable in this modern age.

There are various steps that a Muslim should take in order to preserve the environment.

Hence, it is our duty to maintain and take care of the environment and prevent others from misusing it.

“O children of Adam…be not excessive. Indeed, He likes not those who commit excess.”

Hence, we should try to enjoy His ﷻ blessings without extravagance.

“There is none amongst the Muslims who plants a tree or sows seeds, and then a bird, or a person or an animal eats from it, but is regarded as a charitable gift for him.”

Haram areas are drawn up around water sources such as wells and springs to protect the groundwater from over-pumping, and utilities such as roads to prevent from impairment.

Hima applies to wildlife, forestry, and a designated area of land where grazing and woodcutting are restricted. The Prophet ﷺ established Hima to the south of Madina and forbade hunting within a four-mile radius and the destruction of trees or plants within a twelve-mile radius.

The authorization of inviolable zones is an excellent solution to preserve natural resources in this modern 21st century.

We, as Muslims, are aware this world is a test and not the final destination, and the beauty of this world is not everlasting. This belief does not give us the liberty to misuse the creation of Allah ﷻ – the environment. For minor environmental degradation, such as littering, to major destructions, such as industrial pollution, one will be held accountable before their Lord ﷻ.

Even though Allah ﷻ is the Creator and Maintainer of the whole universe and can take care of the environment, we need to remember that He ﷻ is also testing us with this bounty that He ﷻ has bestowed upon us, as He ﷻ says in the Qur’an,

“….that He may try you through what He has given you…”