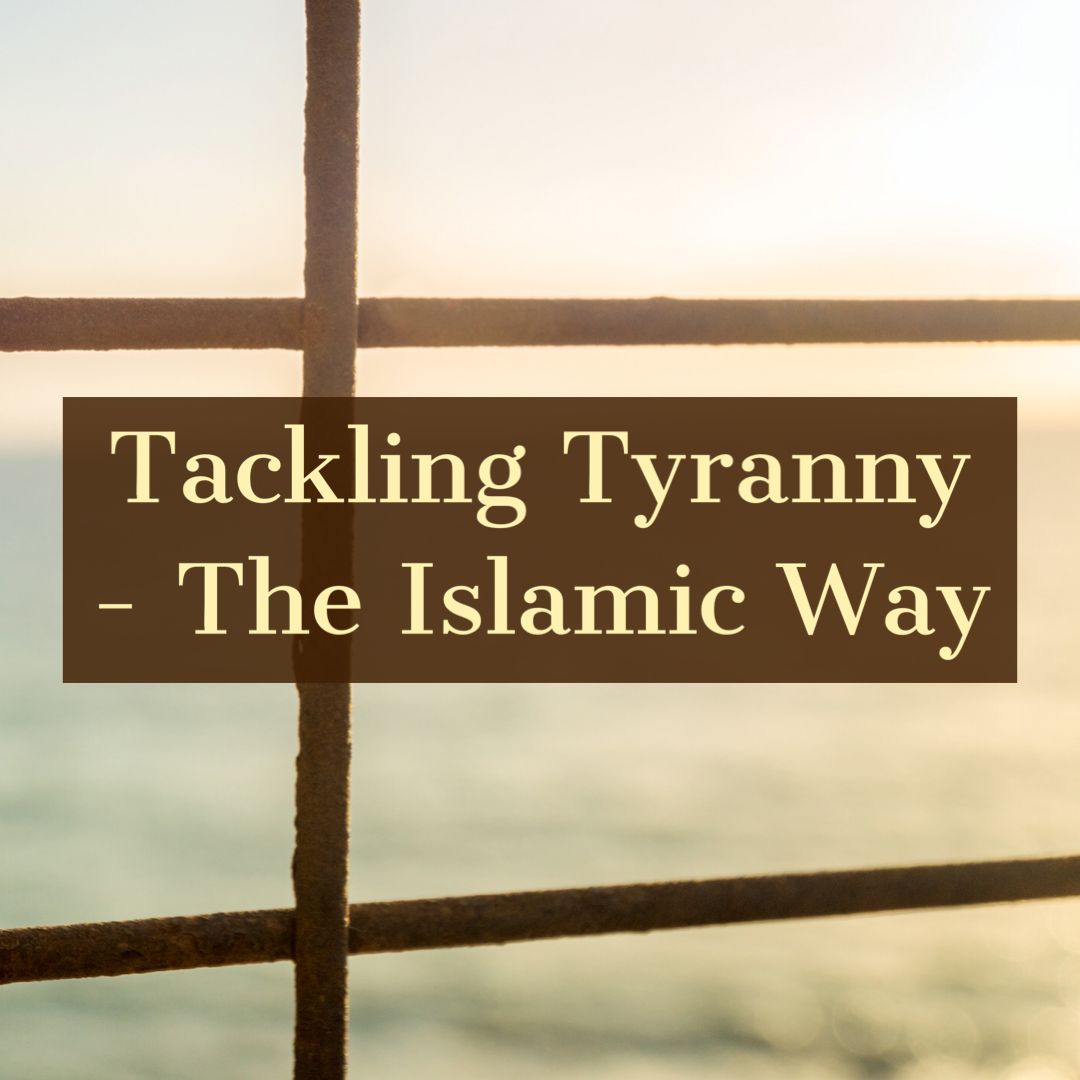 The term ‘tyrant’ is commonly used to describe the ruthless and fanatic rulers of the past. However, with the evolution of man, the concept of tyranny has also evolved. Nowadays, the term ‘tyrant’ is used liberally, frequently making headlines. It must be understood that this tyranny did not occur overnight.

“All tyranny needs to gain a foothold is for people of good conscience to remain silent,” .

The situation today proves it: the lack of cooperation amongst the public, the frequent misuse of the law, criminals being freed despite not having served full sentences, violent and non-violent protests taking place on the streets, the uprise of corrupt forces, rampages… The list is endless.

Certainly, the responsibility for all this chaos falls equally on both parties― the ruler and the ruled.

Instead of plunging into vain criticism and protest, we, as Muslims, need to first be aware of the issue that we are dealing with. Tyranny is not something that can be extinguished easily, as it is part of the Qadr set by Allah ﷻ, a sign bringing us closer to the day of our account.

Hence, Muslims must understand that only the intervention of Allah ﷻ and His divine mercy can help solve the problem. This can be achieved by engaging in virtuous deeds and calling on to the mercy of Allah ﷻ.  We must look for solutions together, as an ummah, within the Shariah of Allah ﷻ, and look up to the Salaf as Saaliheen (may Allah have mercy on them all). Allah ﷻ says,

“…And if you disagree over anything, refer it to Allah and the Messenger, if you should believe in Allah and the Last Day. That is the best [way] and best in result.”

The Shariah Solution to Tyranny – In Case of a Muslim Ruler

“O you who have believed, obey Allah and obey the Messenger and those in authority among you…”

Allah ﷻ orders us Muslims to obey those in authority, as long as they fall within the Shariah limitations. It may be a bitter pill to swallow, but it is part of the religion to follow the Muslim leader, whether you like it or not, as the Prophet ﷺ said,

“It is obligatory for you to listen to the ruler and obey him in adversity and prosperity, in pleasure and displeasure, and even when another person is given (rather undue) preference over you.”

Islam teaches us not to shun or curse authority. Obedience to the Muslim ruler means that one shouldn’t rebel or revolt against him. Therefore, when we, the common people, judge these leaders to be in error or committing terrorizing acts, we are not supposed to take matters into our own hands recklessly; this will only make things worse for the community.

“After me, you will see preferential treatment, so be patient till you meet me at Al-Hawd.”

“Indeed, after me, you will see preferential treatment, and matters that you dislike.” They said, “Then what do you command us (O Messenger of Allah).” Heﷺ said, “Give them their rights, and ask Allah for yours.”

The Messenger of Allah ﷺ was repeatedly asked what was to be done in case of a ruler who expected obedience while not fulfilling his responsibilities as a ruler. Ash’ath ibn Qais (may Allah be pleased with him) responded in his ﷺ stead,

“Listen to them and obey them, for on them shall be their burden and on you shall be yours.”

In addition to obedience to the ruler, one should have patience in times of difficulty. And certainly, patience should never be underestimated, as it bears fruitful results in this world and the Hereafter. We have the examples of Prophets (peace be upon them all) for this, such as Prophet Ibrahim and Musa (peace be upon them), who bore the most appalling tyrants in history patiently.

Above all else, we must always remember to make du’a and ask Allah ﷻ for a good leader. Du’a is our weapon against oppression; our call to the Lord of the Universe ﷻ Who listens to all, especially the oppressed.

There is, however, an exception as to when a Muslim can disobey the ruler. The Prophet ﷺ said,

“…There is no submission in matters involving God’s disobedience or displeasure. Submission is obligatory only in what is good (and reasonable).”

As clearly mentioned in the ahadith above, one should refuse to obey an order when it is in disobedience to Allah ﷻ or when it involves evil matters. Therefore, we must be careful when making decisions in such circumstances, as there is nothing more important than Allah’s ﷻ commands.

The Wisdom of Shariah

Many of us would find obedience to an unjust tyrant cowardly and illogical. Most laymen would start questioning the hows and whys of the situation. And in some cases, there would be denial and defiance, while others may obey, although not wholeheartedly

In order to truly understand and implement this law, we should look to scholars for an explanation.

Ibn Abil-‘Izz (may Allah have mercy on him) explained, “As to the rule that we should obey those in authority even if they are unjust, it is because the evil that would result from revolting against them would be many times worse than the evil which resulted from injustice. In fact, by patiently bearing their injustice, we atone for many of our misdeeds and add to our rewards, for Allah ﷻ has only inflicted them upon us on account of our misdeed.”

Protesting and revolting, or even condemning the Muslim ruler, may result in an evil much greater than tyranny. Therefore, Shariah focuses on preventing the greater evil.

In fact, we have many examples today where countries are in chaos because of relentless protests for different problems. We may feel that rebelling and standing up for our rights falls under the category of enjoining good and forbidding evil; however, the consequences of such actions can cause long-term damage, despite the immediate benefit. Thus, these acts should not be done.

Imam at-Tahaawee (may Allah have mercy on him) said, “We do not believe in revolt against our leaders and rulers, even if they commit injustice, nor do we pray against them or defy their orders. On the contrary, we believe that obedience to them is a duty and a part of our obedience to Allah ﷻ, so long as they do not order anything sinful. We pray for their safety and piety.”

As Muslims, we submit ourselves to Allah ﷻ in complete obedience and sincerity. On the basis of the submission, we should honour and implement the Shariah the right way. It may not make sense to us, but man’s logic is insufficient to comprehend the bigger picture― the big picture that illustrates the limitations of this world and portrays everything around as something that is simply temporary. So, we need to regard our life as a journey, and travel to the final destination by adhering to the manual given to us.