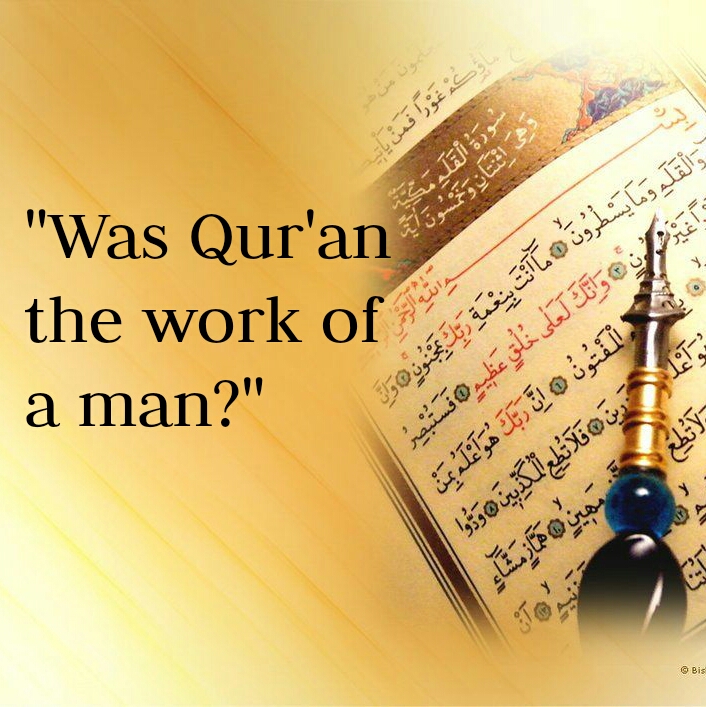 “Muhammad invented Islam and the Qur’an to satisfy his own needs and not for the benefit of people.”

“The ‘holy’ Qur’an is just a ‘word of mouth’ that Muhammad transmitted using ‘Allah’ as a puppet to gratify his selfish desires.”

“Muslims believe the Qur’an to be a contradicting nonsensical proclamation descended from the heavens to an illiterate merchant, which is not applicable to the life of modern times.”

“It all lies in how smartly Muhammad manipulated and tricked people into believing his fairy tales in the name of Islam.”

These are few of the meaningless allegations laid against the Prophetﷺ. In an attempt to refute these, it is important to understand whether the Qur’an is the word of Allah ﷻ in the first place.

Proof that Qur’an is the Word of Allah ﷻ:
1. Allah ﷻ issued an open challenge in the Qur’an to the Jinn and humankind to produce anything like it, which nobody could do.

Say: If the mankind and the jinn were together to produce the like of this Qur’an, they could not produce the like thereof, even if they helped one another. [Al-Israa 17:88 interpretation of the meaning]

The next challenge was to produce 10 Surahs (chapters) like it which, again, no one was able to do. The challenge then got down to replicate at least one Surah. Apparently, even the most eloquent of people couldn’t create a verse like that of the Qur’an with absolute validity and poetic stance.

“And if you (Arab pagans, Jews, and Christians) are in doubt concerning that which We have sent down (i.e. the Qur’an) to Our slave (Muhammad), then produce a Surah (chapter) of the like thereof and call your witnesses (supporters and helpers) besides Allah, if you are truthful.” [Al-Baqarah 2:23]

2. No matter how much understanding man gains, there will always be shortcomings and flaws. If man had authored the Qur’an, then it would have contained mistakes and contradictions and would have ignored facts.

“Had it been from other than Allah, they would surely, have found therein many a contradiction.”[Al-Nisa 4:82]

Since the Qur’an is free from contradictions and mistakes, it is indeed not the work of a man.

3. The Qur’an contains some great miracles which don’t match the intellectual understanding of human beings. For example, The Qur’an says that when angels travel, they experience a time different from ours.

“The angels and the Spirit ascend to Him in a day, the measure of which is fifty thousand years.” [Al-Ma’arij 70:4]

This verse gives an insight to the theory of relativity, which was not easy for humans to decipher.

4. Reports of matters of the unseen of the past and the future which no human could speak of independently have been explained in the Qur’an. This is not a common man’s cup of tea, irrespective of his intellectual functioning.

Proof that Muhammad ﷺ could not have authored the Qur’an:

1. Prophet Muhammad ﷺ was unlettered. He couldn’t read and write like most of the people at the time. When Jibreel (AS) pressed the Prophet ﷺ and asked him to read, he ﷺ replied,

Allahﷻ states in the Qur’an,

“Those who follow the Messenger, the unlettered prophet, whom they find written in what they have of the Torah and the Gospel…” [Al-A’raf 7:157].

This also affirms the fact that he couldn’t have authored the Qur’an.

2. The Qur’an contains verses where the Prophet ﷺ was warned and criticized, and where his mistakes were talked about. Why would anyone want to write about themselves and make embarrassing statements, portraying oneself as fallible? Especially a leader who had followers who looked up to him. Or in this case, a man who wanted to gain “benefits, popularity and command over people”.

“O Prophet!  Why do you prohibit [yourself from] what God has made lawful for you, seeking the approval of your wives?  And God is Forgiving and Merciful.” [At-Tahrim 66:1]
“…while you concealed within yourself that which God is to disclose and you feared the people, while God has more right that you fear Him…” [Al-Ahzab 33:43]

If Prophet Muhammad ﷺ were to conceal anything, he would have concealed these verses, but he openly recited them.

“And he [Muhammad] is not a withholder of [knowledge of] the unseen.  And it [the Quran] is not the word of a devil, expelled [from the heavens].  So where are you going?  It is nothing but a reminder to the worlds.” [Al-Infitar 81:24-27]

3. Prophet Muhammad ﷺ hailed from a culture that signified myths and superstitions and which held on strongly to horrific cultural norms. The Qur’an was revealed contradicting and prohibiting such aspects of the society, thus shocking the people of Makkah. If a man speaks verses claiming them to be the Qur’an, it is not possible for him to do so without the influence of his cultural background and it is difficult to explain statements that contradict the said influence.

Dear readers, imagine a man -who has a good name and is highly respected in his society- begins reciting verses that are inspiring and motivating.
Imagine these recitals- they are so influential that they can reform an entire nation.
Imagine that they don’t go in an order and are jumbled, yet make perfect sense and have no contradictions.
Imagine he does it over a span of 23 years.
Now, imagine the man is unlettered.

The aforementioned situation sounds unrealistic and is not bound to happen without an intervention of a Supreme or a Divine power. Psychologically, it is hardly possible for a man to stay consistent with his thoughts and actions without a strong motivation or to create factual concepts without supporting information and conducive evidence.  Many fail to understand this, making room for confusion and arguments.

Allah ﷻ clarifies in the Qur’an,

“Your Companion is neither astray nor being misled. Nor does he say (aught) of (his own) desire. It is no less than inspiration sent down to him. He was taught by one mighty in Power.” [An-Najm, verses 2 to 5]

Like Loading...
Category: Articles
Tags: Prophet Muhammad (SAW), Psychology, Quran, Quran is Divine, Was Qur'an the Words of a Man?, Words of Allah