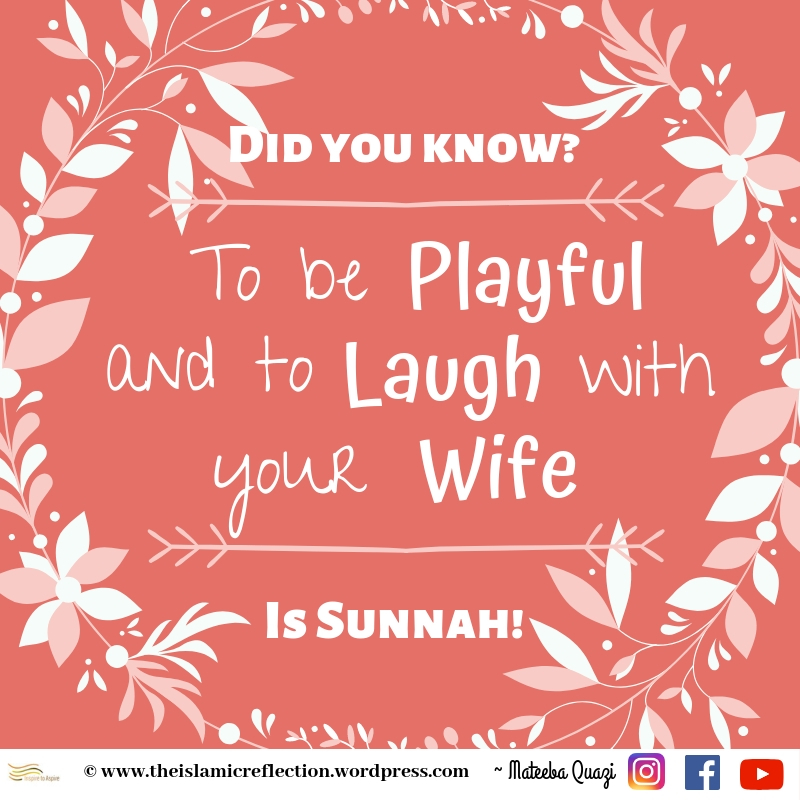 Aishah narrated: “I used to play with dolls in the presence of the Prophet of Allah ﷺ, and my girlfriends also used to play with me. When the Messenger of Allah ﷺ, entered (my room) they would hide themselves, but the Messenger of Allah ﷺ, would call them to join and play with me.”
Reported by Al-Bukhaari (6130) and Muslim (2440).
An-Nawawi said: “This is a sign of his kindness and good treatment to his wife.”
The explanation of An-Nawawi on the book of Muslim (205/10).

Playing and joking between the spouses fills their hearts with delight, synchronization,and love. This fortifies the marital bond and expandsempathyand love between them.
Al-Qassimi said: “Joking and being playful is something which
delights women’s hearts.”
Maw’ithat Al-Mu’mineen (page 168).

Ad-Daynoorisaid: “Despite how firm he was, ‘Umar used to
say, “A man should act (as playful) as a child with his wife, but act like a real
man, when the need arises (outside his house).”
Al-MujaalasahWaJAwaahir Al-’Ilm (430/3).
Reference
Zad Publishing, 2014, King Fahd National Library Cataloguing-in- Publication DataAlmunajid, Muhammad Bin Salih How He treated them? /Muhammad Bin SalihAlmunajid- Riyadh, 2014
Written  by:  Mateeba Quazi
Edited by: The Editorial Team
Team IR
©