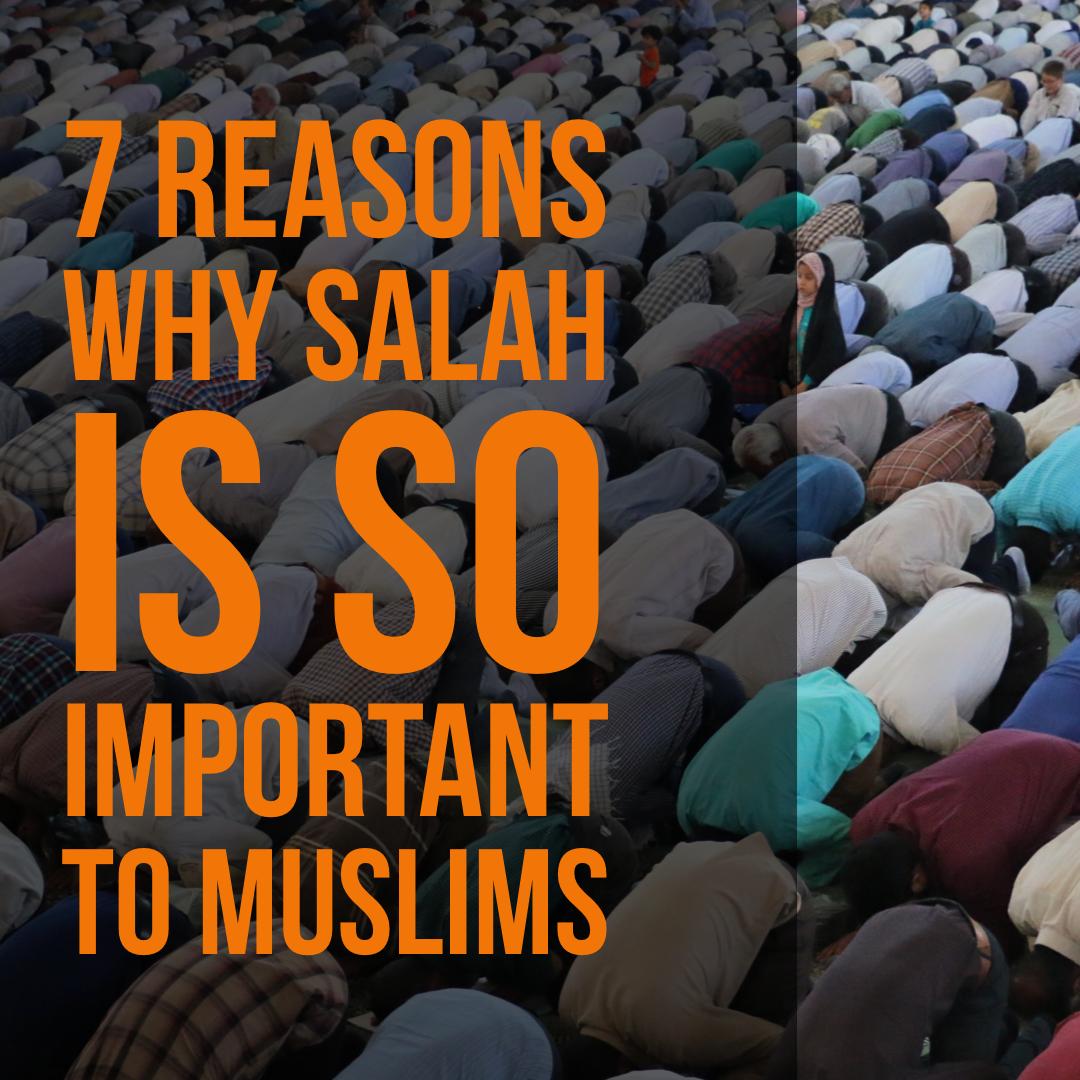 “…And invoke (Allah’s blessings) upon them.”

Salah is the second pillar of Islam, after the Testimony of Faith by which one becomes Muslim. It is also the head of the physical acts of worship that was brought by all of Allah’s Messengers. Salah is not just a mere act, rather it is an act with multiple benefits that signify its obligation. These benefits are as follows:

Prayer was commanded by Allah ﷻ to Prophet Muhammad ﷺ on his ascension to Heaven (Al-Miraj) any other act of worship. This shows its greatness and confirms its obligation on all Muslims. It is mentioned in a Hadith:

“Between a man and shirk and kufr there stands his neglect of the prayer.”

According to the unanimous agreement of the Muslim scholars, a Muslim who denies Salah is considered an apostate and he/she should be asked to renounce, and if he/she does not, he/she is supposed to be killed.

Salah is one of the most virtuous deeds as mentioned in the following hadith:

3. First question in the grave

All acts of worship are performed so that one gets close to Allah ﷻ. Salah, too, helps bring one close to Him ﷻ, as it is an act performed five times a day. The connection between a servant and Allah ﷻ is established, put into practice, improved and increased through Salah.  As mentioned in the aforementioned Hadith, if the prayers are sound and proper, then the rest of the deeds will be sound and proper. When a servant goes to sujood during Salah, he/she is close to his Creator. The Salah is like a conversation between a slave and his Master. The soul requires this connection so that it does not get corrupted.

Salah has a lasting effect on a person, if it is done properly. It brings about the true remembrance of Allah ﷻ and causes one to turn to Him   ﷻ for forgiveness. So, after finishing the prayer, one’s heart will be occupied with remembrance of Allah ﷻ; with fear of His displeasure  and hope in His Mercy. Allah ﷻ said:

“Verily, was created impatient, irritable when evil touches him and niggardly when good touches him. Except for those devoted to prayer those who remain constant in their prayers…”

When one performs Salah, it means he/she is aware of Allah ﷻ and this helps in successfully striving against all kinds of evils and temptations. It also helps one to remain steadfast at times of trials and hardships and protect oneself against the weakness of the flesh and the harm of excessive appetites, Allah ﷻ said:

A Muslim turns to Allahﷻ  five times a day, making it a type of purification for the evil deeds he committed. Also, the repeated standing in front of Allah ﷻ should keep the person away from performing sins during the day. Moreover, it should also be a time of remorse and repentance, such that he earnestly asks Allah ﷻ for forgiveness for all those sins that he has committed. The Prophet ﷺ said:

“If a person had a stream outside his door and he bathed in it five times a day, do you think he would have any filth left on him?” The people said, “No filth would remain on him whatsoever.” The Prophet ﷺ then said, “That is like the five daily prayers: Allah wipes away the sins by them.”

[Recorded by al-Bukhari and Muslim]

Salah, being the second pillar of Islam, has importance in the lives of Muslims of all ages, all over the world. chosen an ideal life for Muslims, and prayer presents the real picture of that life. In Salah, you are getting an opportunity to speak to the All-Powerful God Who created everything in this universe. A great deal of emphasis is placed on Salah so that it is observed dutifully, since whatever good deeds by one who neglects Salah useless. So, as Muslims, we should realise that above all, Salah is an obligation, and it is upon us to fulfil this obligation no matter what.