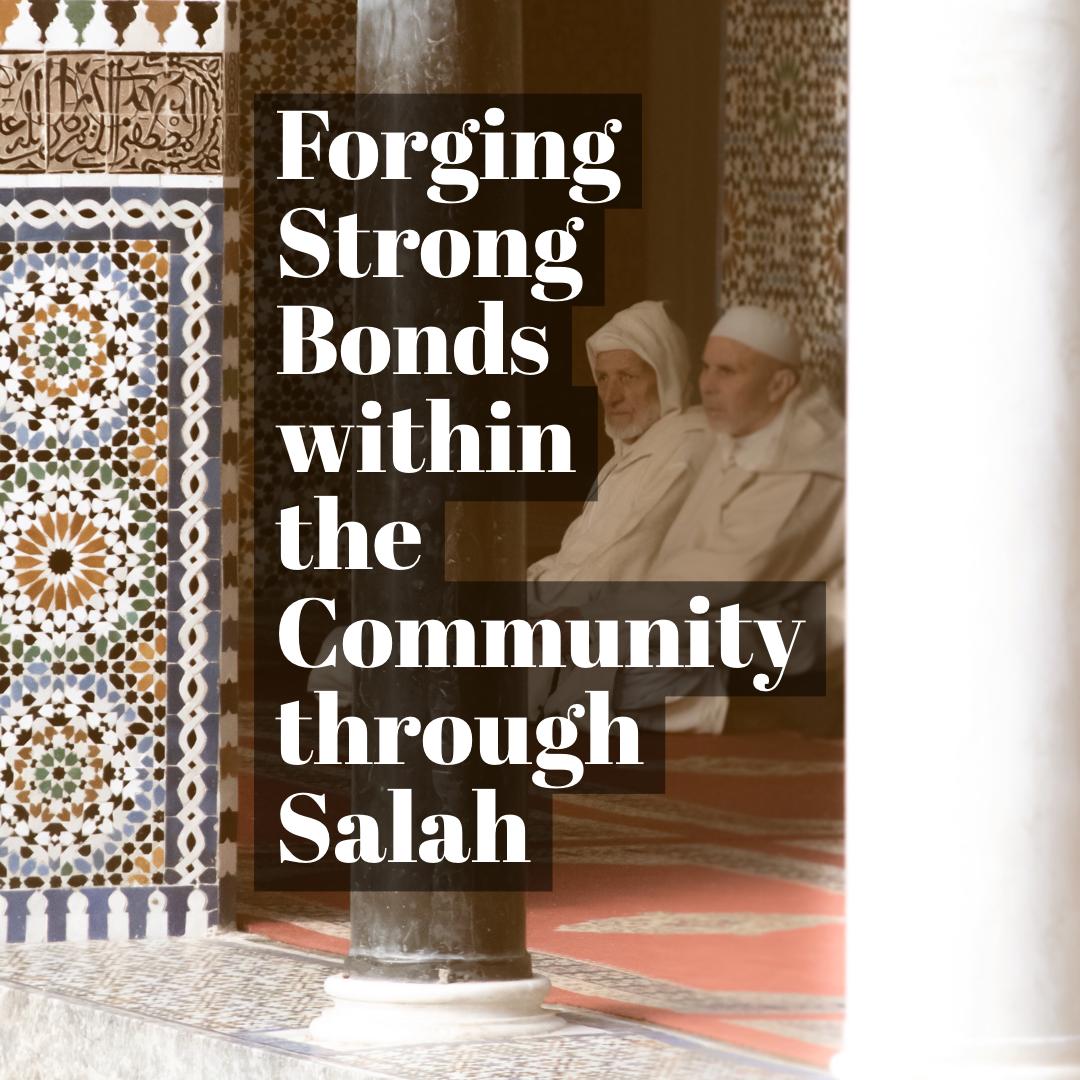 The Arabic term for “community” is one we are all familiar with from our supplications and history books, although the context might be more comprehensive than in the use of this article– Ummah. As the Ummah of Prophet Muhammad ﷺ, we are expected to honor the ties of kinship and friendship that bind us together. Upholding these relationships for the sake of Allah ﷻ is an act of ibadah.

He ﷻ says, “The believers are but brothers, so make settlement between your brothers…”

This sentiment has been reiterated in the following Hadith,

But in this stressful, technology-driven and perpetually busy world of today, who has the time to forge new bonds within the community, on top of striving to maintain old ties? The solution is simpler than we realize – through Salah. This pillar of Islam has a plethora of physical, psychological and social benefits that science has just begun to unearth, but was prescribed for these very reasons 1400 years ago.

The role of a Masjid in establishing a tight-knit community

A masjid is more than just 4 walls overlooking a chamber designated for prayers. The first Masjid in the history of IsIam, constructed by Prophet Muhammad ﷺ and his noble Companions, was Masjid an-Nabawi in Madinah, and it was just as much a place for Salah as an educational institution. He ﷺ was a trendsetter in this regard: He ﷺ taught his Companions the entirety of Islam as it was revealed to him –the rules of Fiqh, Hadith, Aqeedah and Tajweed, although there were no clear distinctions in his time.

This system of religious education continues to thrive in madrassahs established in masajid solely for the purpose of imparting knowledge of the Deen. It has expanded to include classes for all members of the society: children, men and women. Religious circles – called halaqahs –are fixed routinely to cater to the needs of the community and discuss relevant issues. Students living in different areas gather together to seek knowledge, transcending the barriers of race and background and in doing so, strengthen the bonds of community. One example of this is the Al-Azhar University (formerly Al-Azhar Masjid) in Cairo, Egypt, which still specializes in the sciences of IsIam.

Another way a masjid is instrumental to the community is in its potential as healing grounds. Integrative models of therapy, though relatively new, combine traditionally secular and Islamic methods of healing to provide holistic care. This approach works best for mild anxiety and mood disorders.

Praying in solitude vs praying in congregation

Human beings have an innate desire to belong. Even the most introverted individuals passively seek out the company of like-minded peers. As the adage goes: there is strength in numbers. Gathering in a masjid to pray sharpens the resolve of a believer to be punctual in their prayer. Lining up in rows forges a special bond between the Imam and followers, and is a reminder of their solidarity with one another. This is one of the main reasons behind the obligation of the Friday prayer to be held in congregation. It also sheds a light on why the reward for Salah offered in congregation is 27 times more than that offered alone. [Sahih al-Bukhari, Book 10, Hadith 46].

We all know the hadith in which Prophet ﷺ likened the performance of the five daily prayers to bathing five times in a stream. [Sunan an-Nisai, Book 5, Hadith 15] In either case, the individual emerges purified – spiritually in the former, physically in the latter.

Now, let’s tackle this analogy from a different perspective. Imagine meeting a perfect stranger five times a day, seven days a week, without any exception, at the same place. Would you still consider that individual to be a stranger by the end of the week? At the very least, you would know their name, their occupation, where they reside, perhaps even a bit about their family background. Within the short span of a week, you will have sowed the seeds of relationship which will bloom into friendship– just because you went to pray daily.

Salah and its link to emotional intelligence

Renowned psychologist Daniel J. Goleman defines emotional intelligence (EQ) as “the ability to identify, assess, and control one’s own emotions, the emotions of others, and that of groups.” (Goleman, 1995) He outlines the five main components of emotional intelligence: self-awareness, self-regulation, motivation, empathy and social skills. If you ponder over these components, you will see how prayer contributes to the development of emotional intelligence. All acts of Salah create an acute awareness of one’s humble status before the Mighty Creator. When the heart knows that the tranquility it seeks has been placed in Salah, you will prioritize it above all other.

You might have heard the popular maxim: people who pray together stay together. Studies show that individuals who pray for their partners and friends exhibit increased levels of forgiveness, selflessness and religiosity. Salah has the power to fix all sorts of mishaps in your life: from providing a sense of contentment by quelling your fears to mending existing relationships, in addition to forging new ones.

Integrating children in the community

As the future of the Ummah, children are an invaluable asset. The obligation of Salah extends to children as well, as stated in the following hadith,

Disclaimer- the term “beat them” does not allude to physical abuse like some individuals take it to mean. Rather, it refers to striking them lightly so as to ingrain in their minds the significance of prayers.

Children learn best by example. They start modelling their parents’ behaviour from a young age. This is why scholars recommend taking them to attend halaqahs in the masjid regardless of their age. Repeated exposure to such gatherings has a subconscious positive impact in their personality and upbringing. They will be attuned to goodness and will endeavor to stay away from sin throughout their life. While some masajid have separate arrangements for mothers with young kids, there are many that explicitly forbid their presence especially during Salah times, citing excessive noise and disturbance as justification. This is an unfortunate development as these very children that are shunned from the masjid grow up to be adults that don’t care for their prayers, much to the dismay of their parents whose advice to go to the place that didn’t really welcome them when they were young falls on deaf ears. For this very reason, a masjid in Turkey has the following notice for all parents to ponder,

“Dear Muslims, if there are no sounds of children laughing in the back as you are praying, fear for the next generation.”

While parents still have the responsibility of educating their children on the etiquette of the masjid so they don’t disturb others, it is incumbent upon the attendees to be patient and merciful in their interaction with the youngest members of the community.

Although the primary objective of Salah is the remembrance of Allah ﷻ, its benefits are multidimensional. Salah helps foster new relationships, especially when offered in congregation in the masjid. In this regard, Salah really is the perfect ibadah – one that helps you fulfill your duty to your Lord as well as to your fellow human beings.

Coleman, D. Emotional Intelligence: Why It Can Matter More Than IQ. Bantam, 2005.