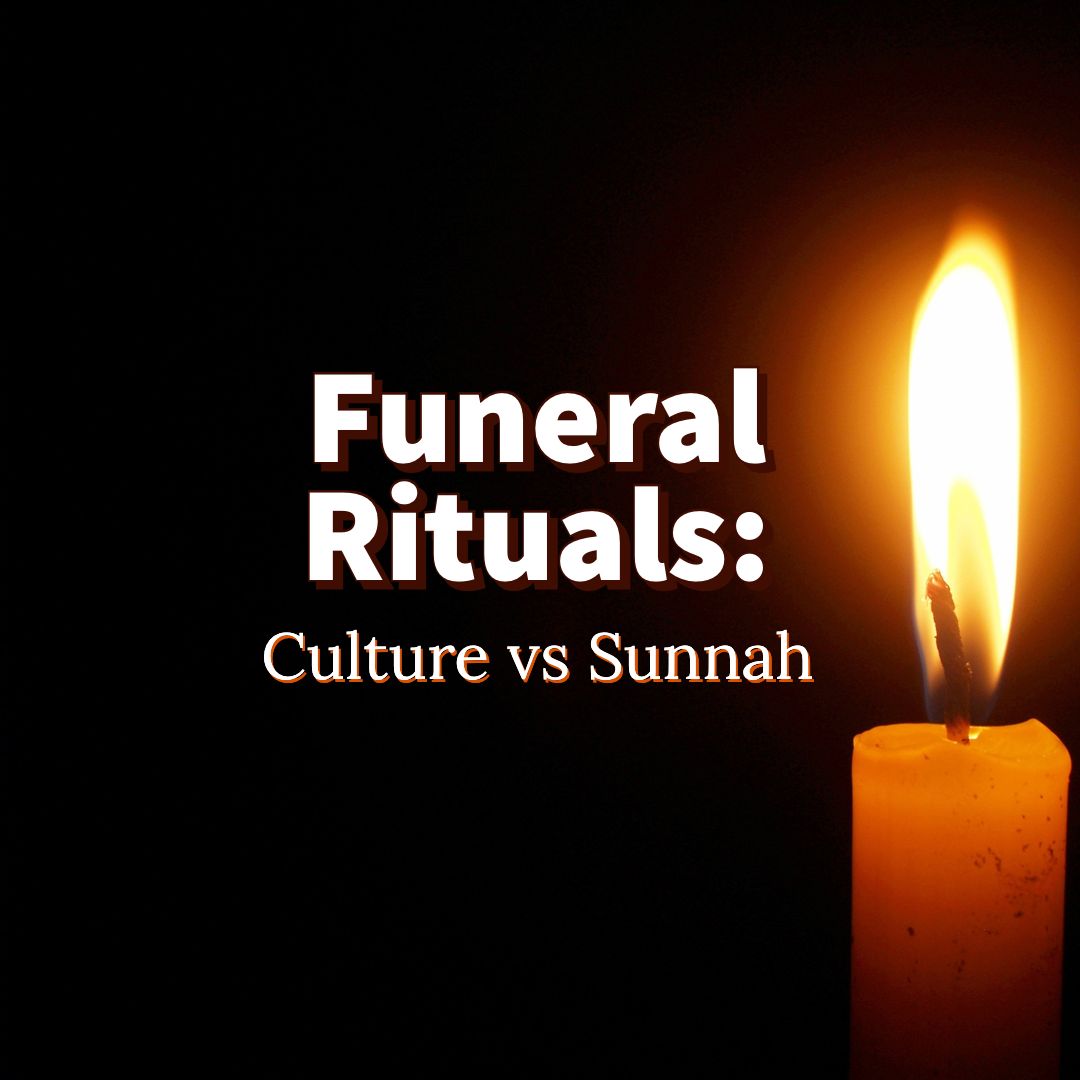 When Allah ﷻ created us, He sent us guidance through His messengers (peace be upon them) and revelations, and whenever people went astray, He ﷻ reminded them to avoid the path of Shaitan. The Prophet ﷺ said,

“I have left with you two things. As long as you hold unto them you will not go astray: The Book of Allah and my Traditions.”

It is important for us to practice the Sunnah to differentiate ourselves from the disbelievers. However, people tend to practice local customs instead of Islamic traditions to the point of innovation. This makes our practices and ceremonies, including funerals, more attuned to local cultures than to the Prophet’s ﷺ Sunnah.

This article sheds light upon the most common innovations that have crept into our funeral rituals.

Common Innovations and The Prophetic Sunnah

It is the Sunnah of the Prophet ﷺ to prompt the one dying, before his death, to say the Shahada. He ﷺ said,

It was neither the practice of the Prophet ﷺ nor his companions’ (may Allah be pleased with them) to do so. Rather, the Prophet ﷺ said,

“Hasten with the Janazah, for if it was righteous, then you are taking it toward something good, and if it was otherwise, then it is an evil of which you are relieving yourselves.”

Hence, it is not permissible to delay the Janazah unless there is a dire need to do so, or to wait for his relatives or neighbors to attend, if that will not take too long. [Salih Al-Munajjid, Islamqa.info]

People express their grief in many ways when they lose their loved ones. Islam guides us on how to manage our grief and mourn in accordance with the Sunnah of the Prophet ﷺ, as he himself was seen to shed tears over his dead relatives and companions. Mourning in Islam should not exceed three days – except for the wife, who mourns for her husband’s death for four months and ten days, as Allah ﷻ says,

“And those of you who die and leave wives behind them, they (the wives) shall wait concerning themselves for four months and ten days…”

Some cultures mourn for forty days, which is forbidden in Islam, as it disrupts the daily activities of a person. Umm ‘Atiyah said,

“We were forbidden to mourn for more than three days for a dead person, except for a husband, in which case a woman should mourn for four months and ten days. (During this period) we were not allowed to wear kohl on our eyes, nor perfume ourselves, nor wear colored clothes, except a garment of ‘Asb (special clothes made in Yemen). But it was permissible for us that when one of us became clean from her menses and took a bath, she could use a piece of a certain kind of incense. And it was forbidden for us to follow funeral processions”

This Hadith enlightens us on how to behave during the mourning period according to the Sunnah.

However, there are cultures that contradict the Sunnah and have extreme practices that are associated with pre-Islamic concepts, such as shaving the head of a widow or disheveling her hair. Some communities even lock the widows in dark rooms and forbid them from looking at mirrors. Wailing, screaming, slapping cheeks, and tearing clothes are some of the other practices that are strictly forbidden in Islam, as they indicate dissatisfaction and displeasure with Allah’s ﷻ decree. The Prophet ﷺ said,

“He who slaps the cheeks, tears the clothes, and follows the tradition of the Days of Ignorance is not from us.”

Although paying condolences is a Sunnah practice, people commit many violations in this regard. For example: holding banquets, displaying extravagance, burdening the family of the deceased, renewing their grief and sorrow, talking and laughing – which lead to hurting the feelings of the deceased family – and distributing copies of the Qur’an to recite for the soul of the deceased. All these acts are forbidden in Islam. The Prophet ﷺ said,

“When a man dies, his deeds come to an end except for three things: Sadaqah Jariyah (Ceaseless charity), a knowledge which is beneficial, or a virtuous descendant who prays for him (for the deceased).” [Muslim]

In light of this hadith, it is not allowed to ask someone to recite Qur’an on behalf of the dead, as his deeds have come to an end with his death. However, supplicating for the deceased and giving out sadaqah on behalf of them are permissible.

And we should try to stop gatherings that bring no good to the deceased or his family.

Imam Ash-Shafi’i (may Allah have mercy on him) said, “I dislike condolence gatherings, even if the people did not raise their voice with crying. That surely renews the distress, burdens the people with unnecessary expenses…” [Ahkam al Jana’iz]

Sunnah is a great guide, and whoever holds firm to it shall never go astray. Funeral rituals constitute a vast area of our lives, and these improper practices continue to exist today. It can be difficult to change some practices; however, Islam, being a flexible religion, has made custom (‘Urf) one of the secondary sources to the Islamic rulings – as long as it is in accordance with the Qur’an and Sunnah. It is upon the people of knowledge to spread awareness and the teachings of Prophet Muhammad ﷺ to those who are misinformed and to the new generations.