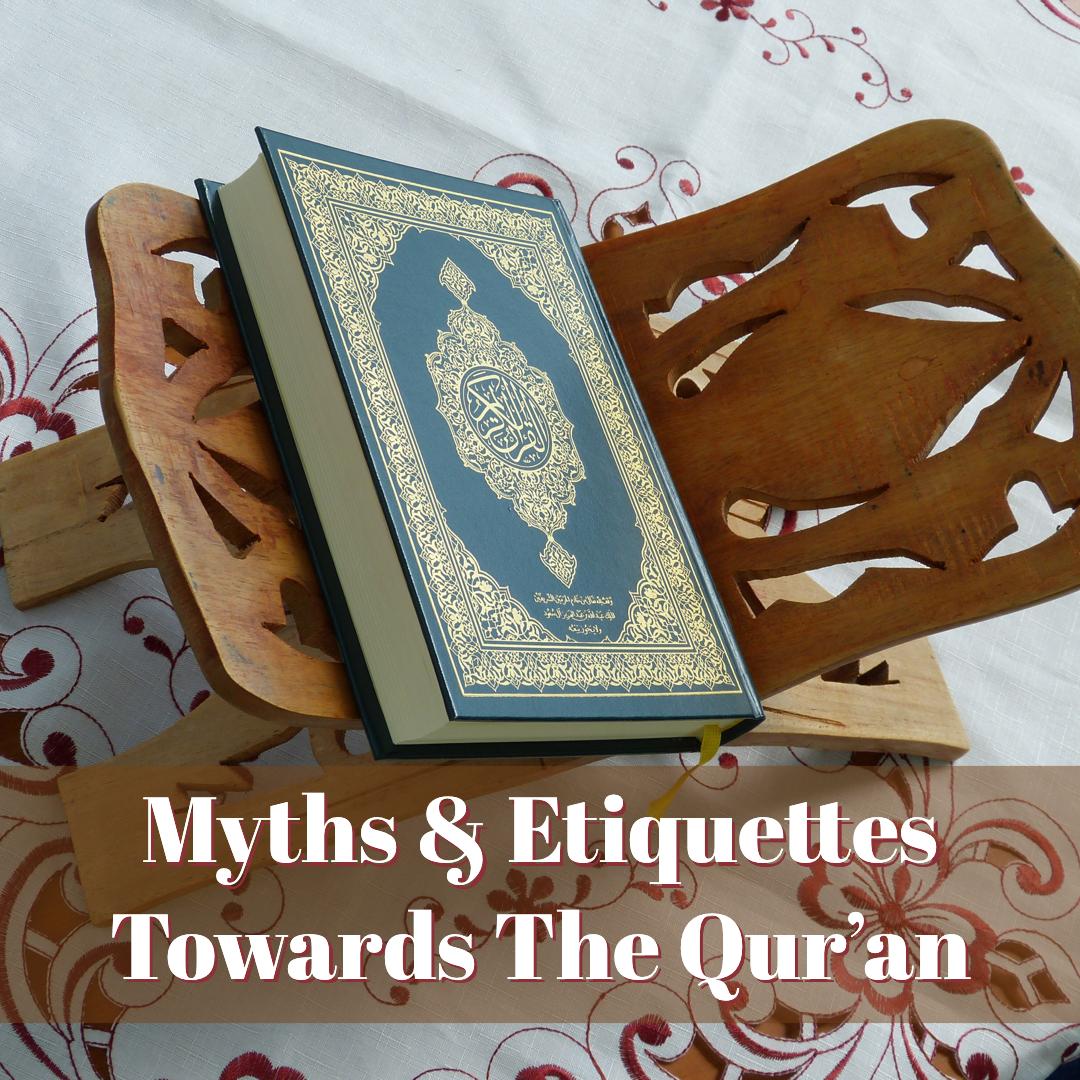 One of the beautiful names of the Qur’an is Al Furqaan, meaning “the criterion” or “the distinguisher” (of right from wrong). Yet, many of us fail to understand the right mannerisms needed with the Qur’an. Many show their affection for the Qur’an by showering it with unsolicited kisses, but they don’t adopt true love by following its given message. Many Muslims today are misguided when it comes to handling or using the Qur’an and are not finding the right decorum for it. Just like Al Furqaan, we should distinguish the Sunnah from age-old fabricated traditions.

It is astounding to know how many myths there are related to handling the Qur’an that people follow in their daily lives. Some of the myths are as follows:

Myth Debunked: There is no prescribed position for reciting the Qur’an, as our Prophet ﷺ used to recite the Qur’an while lying down on Aisha’s lap during her menses. [Bukhari 7549 and Muslim 301]. The renowned Scholar Al-Nawawi (may Allah have mercy on him) said in Sharh Saheeh Muslim that this indicates that it is permissible to read the Qur’an when reclining or lying down.

Myth debunked: Scholars have ruled that there is no such ruling necessitating the hijab while reading the Mus’haf. Shaykh Ibn ‘Uthaymeen (may Allah have mercy on him) said that reciting the Qur’an does not require covering the head. He said in his comments on the Sujood at-Tilaawah (prostration required when reading certain verses of the Qur’an),

“Sujood at-Tilaawah is to be done when reading the Qur’an. It may be done in any state, even with the head uncovered, because this prostration is not subject to the same rulings as prayer.”

Myth debunked: This is another baseless tradition that people practice to show their love for the Qur’an. According to the Fatwa Standing Committee,

“We know of no evidence that prescribes kissing the Qur’an, which was revealed to be recited, respected, understood and acted upon.”

Also, this extra affection is not needed when one accidentally drops the Mus’haf, because that act does not guarantee forgiveness. However, if one does drop the Mus’haf unintentionally, then there is no sin upon that person.

Myth debunked: The recitation of the Qur’an peacefully and calmly is desirable, and swaying contradicts it. Moreover, this action is the practice of the Jews; hence, Muslims should not do it. [Bida al-Qurra by Bakr Abu Zayd, p. 57]

If it happens unintentionally, it is not sinful upon them. However, one must try and avoid it.

Myth debunked: This is a very common practice in many Muslim homes. They hang the verses as a decoration and ‘a reminder’, but this is a vain method that was not practised by the earlier generation of the sahabah and scholars.

Myth debunked: To beautify the Qur’anic recitation, some people adorn their voices with tunes of songs in their recitation. Shaykh al-Islam Ibn Taymiyyah (may Allah have mercy on him) said, “Reciting the Qur’an in a melodious way whereby it resembles the melody of a song is disliked and is an innovation, a ruling clearly mentioned by Malik, Al-Shafi’i, Ahmad bin Hanbal and other Imams as well.”

Despite the myths, it is a duty upon every Muslim to learn the proper decorum towards the Mus’haf and avoid all the myths, even if they have been practising them for years. The Qur’an was sent to the Prophet ﷺ as a blessing and miracle for all mankind.

“Every Prophet was given miracles because of which people believed, but what I have been given is Divine Inspiration which Allah has revealed to me…”

Hence, it must be treated in the way taught by the Prophet ﷺ. These are some of the correct etiquettes:

“And none can touch the Qur’an except the purified.”

“The best way to sit is facing the qibla.”

“So when you want to recite the Qur’an, seek refuge with Allah from Satan, the outcast.”

“…and recite the Qur’an with measured recitation.”

“Make your voices beautiful when you recite Qur’an.”

“And when the Qur’an is recited, listen to it and pay heed, that you may obtain mercy.”

Every Muslim should respect and honour the Qur’an because of its status in Islam. But that does not mean that one can go to extremes in terms of honouring it. By doing so, we mislead ourselves and others from the right path, at the same time, making our deen difficult for our own selves. The Prophet ﷺ said,

“Make things easy and do not make them difficult; make people calm and do not scare them.’’

The best and the only way to respect and love the Qur’an is to follow it just like our Prophet ﷺ did. He ﷺ was known as the “Walking Qur’an”, and we must also follow his steps to reach our goal, i.e., Jannah.