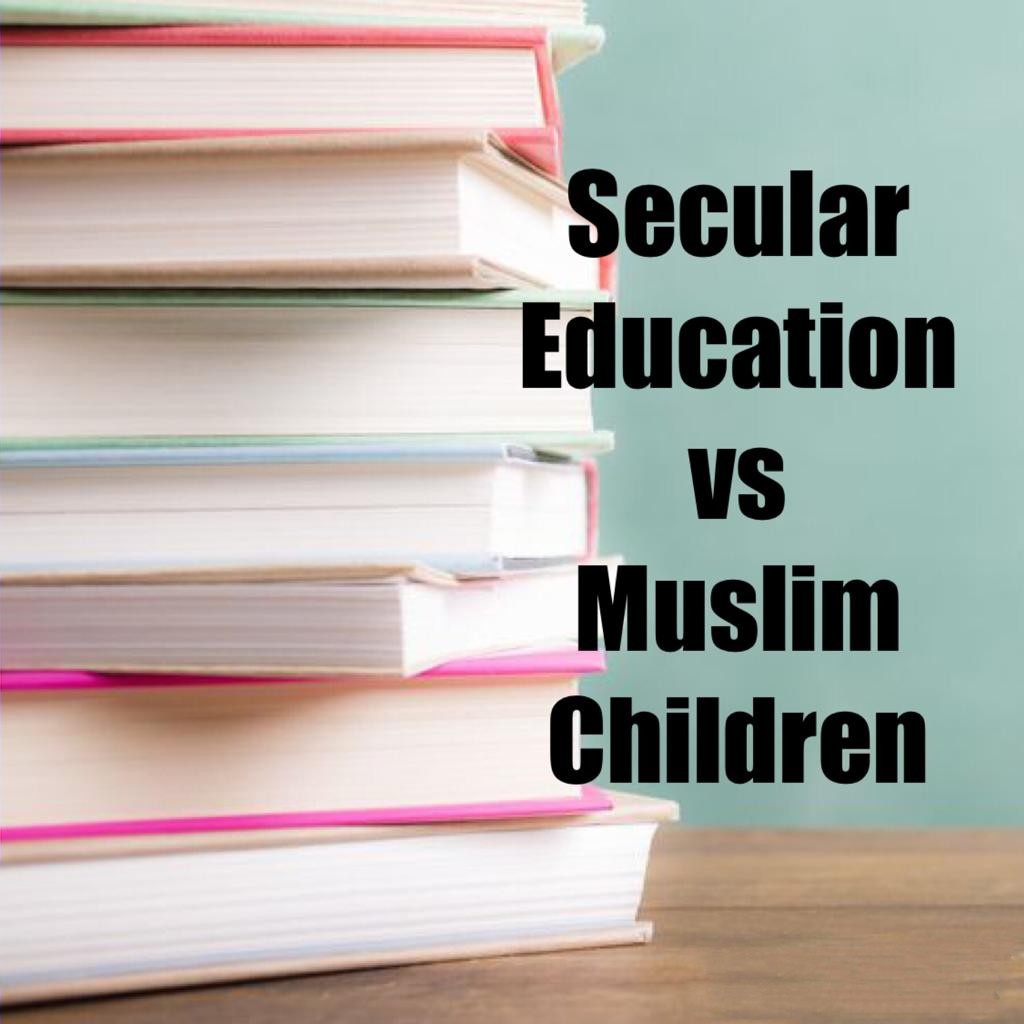 Secularism is a new ideology or movement that seeks to isolate religion from the state. It places a lot of significance on worldly matters and pleasures, creating an implication that the world is the only objective in life, while neglecting and overlooking the Hereafter.

Education based on secularism aims at change and development without the intervention of religious aspects. Islam neither favours the view that education should be secularized nor does it uphold the theory that life is possible without adhering to worldly matters. Its system combines the benefits of both the worldly life and the spiritual domains. Thus, Islamic education not only prepares Muslims for the future in this world but also determines their time in the Hereafter.

Every educational system has its own basic philosophy, principles, and concepts. Secular education is a system of public education that includes no reference to religion in any of the subjects.

Islamic education is free from state control. The entire system owes its existence and continuance to a pure and pressing demand for light and knowledge, according to the great inspiring effect of the Qur’an. Thus, it has always driven Muslims to seek learning and to spread it far and wide wherever they exist.

The system of Islamic education has its merits. It makes education inspiring and invaluable. It strengthens faith in Allah ﷻ and human brotherhood. It prepares children for future struggles– without which, the glories of human culture and civilization cannot survive. It prevents waste through ideal programmes. To the ailments of children, Islamic educational values can be the panacea. And it is a means to moral upliftment, material advancement, and welfare of the Muslim nation– consequently, the welfare of mankind.

Secular Education and The Challenges Faced by Muslim Children

The modern secular education system, with its tools and devices, has changed many countries. It has had a few good effects on some nooks of life in a few countries. And although its contribution is considerable, its drawbacks are many, which can be challenging for Muslim children.

One of the painful drawbacks is the lack of Islamic knowledge in our Muslim children. Many of them don’t have sound knowledge of the Qur’an and Ahadith.

The environment of these institutions is far from conducive to the promotion of Islamic values. Instead of cultivating love and respect for Islamic values of life, children become thoroughly westernized. The line between halal and haram blurs easily. They are influenced to prefer and emulate people and do things that go against Islamic principles.

Thus, it leads to another critical challenge our Muslim children face– the development of Islamic identity. They imitate celebrities and faux influencers instead of acquiring the attributes of the Prophet ﷺ and true believers whom Allah ﷻ praises in the Qur’an.

Furthermore, the rigorous practice of separating the deen from dunya has given rise to indiscipline among children. At the individual level, children may have respect for their teachers. However, the reverence disappears at the collective stage, where they are found to be more undisciplined.

Even in public schools today, children are taught that homosexuality is an acceptable alternative form of family life. There have been frequent reports of girls committing suicide to escape the torture of bullying, or the police being called in to quell rioting on the campus. Such tragic incidents have become a feature of the modern education system, as the system lacks the values that religion instils in people.

Moreover, when it comes to globalization, so far, none of its aspects are being carried out in the field of education with Shariah as the guide. The more the actions and philosophies that are not based on Shariah are globalised, the more our Muslim children find themselves compelled to operate in environments that undermine, rather than promote and protect, Islam and the Islamic way of life.

How to Maintain Islamic Education for Muslim Children?

Besides the educational setup, the primary responsibility of grooming the citizens of tomorrow rests on the parents. The parents’ influence on their children, when either or both are Islamically enlightened, will certainly be marvellous.

The home is where the foundations of a responsible citizen ought to be laid. It is the duty of the parents to spend time with their children and prime them with words of wisdom. They should not expose or allow themselves or their children to immorality and corruption– whether it is stopping them from attending parties where there is free-mixing, dancing, and music; preventing them from watching or reading immoral content; or restricting them from taking part in celebrations that contain immorality.

Families must initiate and sustain a project to show children what it means when Islam is described as a complete way of life. They should not only teach them to read the Qur’an and observe the five pillars of Islam, but also take the different aspects of human existence and guide them by means of the Qur’an and sunnah. For instance, in Surah Luqman, a father teaches his son tawheed, how to be grateful to Allah ﷻ, how to walk, how to control his voice, etc.

General Islamisation is also an effective weapon to fight the evil of secularism. It is a personal spiritual self-administered programme in which the individual Muslim child constantly asks himself how Allah ﷻ wants him to behave at each point in time and space, with regard to each action before him. He will then act accordingly and to the best of his ability.

Additionally, Arabic has to be a foundation for Islamic education, since it is the fountainhead of Islamic teaching. Training Muslim children to learn and speak the language of the Qur’an allows them to memorize the Qur’an and perceive its meanings easily. Until they read the Qur’an in its original language, they will not be able to fathom the philosophy of Islamic thought completely.

Home-schooling and having frequent contact with Masjids, Islamic libraries, and organizations can protect Muslim children from the harmful influences of secular education. Parents too can provide their children with a good library of Islamic books at home and motivate them to read and implement them.

Researchers and writers can individually and collectively produce books and pamphlets mentioning the rules, regulations, and guidance that Islam has on each and every aspect of human existence. These can then be published in different languages and on various global media available these days to benefit as many Muslims as possible.

An education system, imbued with Islamic values and its leaders, teachers, principals, and managers, will undoubtedly help build the future of Muslim children. It will contribute good citizens, qualified hands, and trained personnel to countries or communities.

If coordinated effectively, education, dawah, and public enlightenment can help Muslim children to lead a life in which the separation between the spiritual and the temporal affairs does not exist. That will be a situation in which Islam is seen and fully practised as a complete way of life.