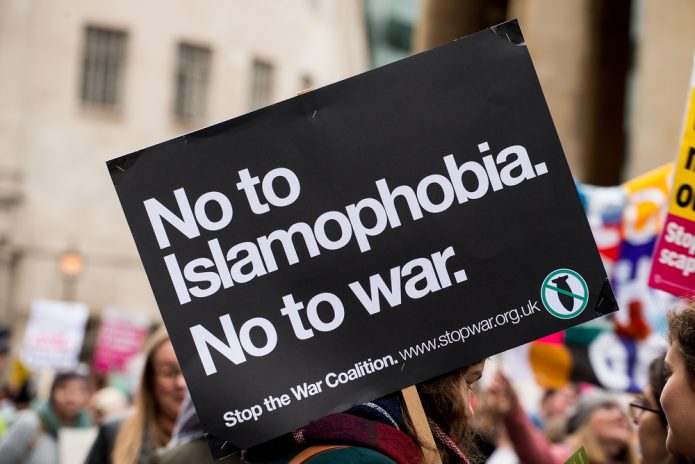 Have you ever been neglected ? And the reason being,

Have people run away from you?

Have they disliked your appearance?

My sister/brother keep wearing that hijab and keep that beard.

Islamophobia has been a trending issue in non-Muslim countries.
Many Muslims face such challenges In their daily lives, it may reach to a point to even give up their faith.

Yes!! It can get to such a serious problem!!

How can we erase this problem then ?

Why do people look upon us as uncivilized? Oppressed ? No freedom No liberty !!

Do you agree to such statements?!

We have been brainwashed by Western Values to an extent that we fear our own identities, we follow what they do to look civilised !!
We remove our Hijabs , we neglect prayers, we leave Islam just to please them and look modernised, go with fashion!

In reality, we are making ourselves slaves to our desires!!

The enmity of the kuffaar – the People of the Book (Jews and Christians), mushrikeen(polytheists) and hypocrites – towards the believers will last until the Hour begins.

The conflict between truth and falsehood will continue until Allaah inherits the earth and whomsoever is upon it.

Allaah says (interpretation of the meaning):

“And they will never cease fighting you until they turn you back from your religion (Islamic Monotheism) if they can. And whosoever of you turns back from his religion and dies as a disbeliever, then his deeds will be lost in this life and in the Hereafter, and they will be the dwellers of the Fire. They will abide therein forever” [al-Baqarah 2:217]

All these are facts!!
What is the result? We will be doomed and have what ??

Read below:
And whoever turns away from My remembrance – indeed, he will have a depressed life, and We will gather him on the Day of Resurrection blind.”
Surah Taha, Verse 124

Life that has no meaning, has no purpose, has nothing but just fulfilling our endless desires.

Well !! Let’s get back to our topic !
Why do people fear Islam ?
Media has played a major role in this issue !!
They have portrayed Islam as being a religion of the sword, a religion of terror!! Have you ever asked yourself,

They will always try to diminish and destroy the Word of Allah and they will never succeed!

They have tried , they are trying and they will try in future!

Turning the whole humanity against Muslims, thinking Power is the Key
What have they done ??

Having one ruler of the world, one currency , one society, one economy etc And what else?

ONE DEEN. One Religion

Well! Open your eyes to Reality!!

What is the solution then ??

In Saheeh Muslim is it narrated from Jabir that the Prophet (peace and blessings of Allah be upon him) said in his Farewell Sermon: “I am leaving behind among you something which, if you adhere to it, you will not go astray after that. It is the Book of Allah.” The version narrated by al-Hakim says “The Book of Allah and my Sunnah.” (Classed as saheeh/authentic by al-Albani in Saheeh al-Jami’, 2937).

The only salvation is Sticking to the teachings found in Quraan and Sunnah of Prophet Muhammad Sallahu alayhi wassalam.

Is leaving Islam the solution to Oppression That is done by the other faiths ?? Will it erase Islamophobia in people ??

Noo!! It will only get it worse
Sometimes you need to understand people’s different thoughts and beliefs.

There are those who believe everything said in the media , some like to find out the truth about Islam !! Some would just be clueless of what’s going on …

What can you do then ?

Live according to the teachings of Islam and your behaviour towards other faiths will eventually reduce that fear in them.

We have always spoke of people not judging Islam through our actions but through what Islam preaches !!

Apparently, the first impression a person gets about Islam is through your actions!! How you behave ! How you respond ! How you wear ! How you react !

Oppression can be in any type of form!
Not necessarily they should touch your body
It can be psychological oppression
Our thoughts are being oppressed and we end up having a phobia about Islam

We end up having fear in even practicing Islam in public.

Teach them Islam through your Manners and let them be impressed by Islamic values.

We need to show them the REAL ISLAM and not the one portrayed in the Media.

So my dear one!!
Next time you think you are oppressed by wearing that hijab !!
Just think twice!