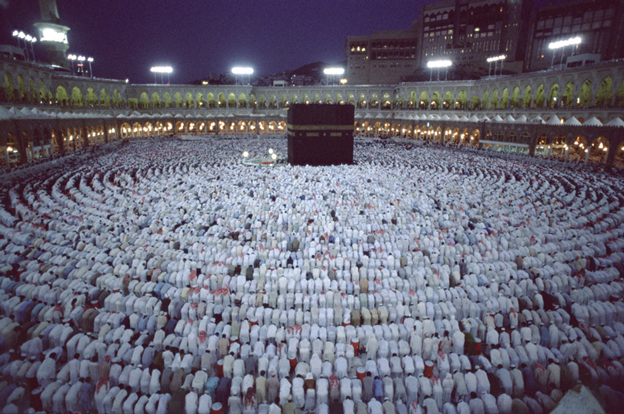 Millions of Muslims standing side by side in prayer dressed simply in 2 unstitched pieces of white cloth regardless of status, race, culture, language, praying in unison to one God in the direction of the Kaaba. This is the sight that has often left its viewers flabbergasted.

Hajj is the fifth pillar of Islamic practice, an obligation for all adult Muslims who are physically and financially able. It is an extraordinary journey from Mecca to follow the actions of the Prophet Ibrahim (AS) while enduring the scorching heat and unaccustomed desert climate.
More than two million Muslims take part in the pilgrimage annually. It is perhaps the only instance where one would see Muslims from Russia, South Korea, Mauritius, India, Cuba, Fiji and others amongst a multitude of other nationalities all congregating to pray to Allah. The diversity of Muslims who make this pilgrimage is staggering.
Malcolm X described the sheer diversity of Hajj in a letter he wrote after he made the pilgrimage himself: “There were tens of thousands of pilgrims, from all over the world. They were of all colors, from blue-eyed blondes to black-skinned Africans. But we were all participating in the same ritual, displaying a spirit of unity and brotherhood.”
Men draped in seamless, unstitched clothing, while women dressed in plain dresses and headscarves; it is a spectacle to behold as they perform each prayer in unison with humbleness and humility towards their creator.
Hajj is a time where each and every Muslim is reminded of the fact that they are equal in the sight of God, and that it is only their righteousness that elevates their status. Not their wealth, race, culture, or gender. By requiring them to wear the same clothes, pray in the same spaces, and perform the same rituals, Hajj establishes a global Muslim community with no class distinctions.
People who have returned from pilgrimage describe it as an uplifting spiritual experience and the sheer assembly of people leaves them astonished. Although chances for inter-group interactions are limited by language barriers, it doesn’t stop the pilgrims from interacting with people from other countries during the Hajj.
A Harvard article discusses the impact of Hajj and how religion and tolerance culminates in the pilgrims being peace loving. Their study states that Hajj increases an index of positive views about people from other countries, particularly a positive impact towards Indonesians, the largest non-Saudi pilgrim group and one the pilgrims report as observing the most.
One female pilgrim stated “I had a very good experience with female Hajjis from Indonesia. They would make space for me whenever I was walking if I gestured for them to do so. One of them even gave me Vicks VapoRub when she found out that I had the flu.”
“Hajj also increases an index of beliefs that adherents of different sects, ethnicities, and religions are equal in contrast to the views on different nationalities, the largest move towards equal status is for people of a different religion who would not be encountered during the Hajj as they aren’t permitted to attend. Hajjis may thus be willing to extend their notions of tolerance beyond the Muslim world.”
They have also found inter-group harmony. People from different ethnic groups, Islamic sects, and religions could live together in harmony in the same society.
Their findings showed that Hajj shifted the focus from localized beliefs and practices towards global Islamic practice, increased tolerance and peaceful inclinations, and led to more favorable attitudes towards women. This serves as evidence that deep-rooted attitudes such as religious beliefs and views about others can be changed and also challenged the view that Islamic orthodoxy and extremism are necessarily linked.
Social psychology literature suggests that social interactions can either lead to positive or negative feelings towards other people depending on whether the setting is competitive or cooperative. Several features of the Hajj create a setting in which the interaction among different groups helps build common purpose and identity.
Other such social institutions like medical education, military training and international peace camps share this ideology. Like Hajj, the participants in these institutions leave their everyday comforts and have certain restrictions on mingling with others to help them establish a setting where they can collectively perform similar actions which require cooperation from others.
The religious elements in Hajj help establish more than just a cooperative setting. For example, pilgrims observing other pilgrims praying somewhat differently yet without interference will lead them to reasoning that some degree of religious diversity is acceptable.
In shifting the spotlight to religious mainstream, Hajj helps Muslims overcome the evolutionary hurdle faced by world religions – maintaining unity in the face of divergence of practices.
References:
https://dash.harvard.edu/bitstream/handle/1/3659699/HajjPaper_25JULY08_final.pdf?sequence=5
http://theconversation.com/explaining-the-muslim-pilgrimage-of-hajj-83284
https://www.timesunion.com/local/article/Hajj-celebrates-unity-and-diversity-12162972.php
https://qz.com/784128/hajj-in-mecca-faces-of-muslim-pilgrims-from-around-the-world-at-this-years-hajj-2016/
https://www.ncbi.nlm.nih.gov/pmc/articles/PMC544433/