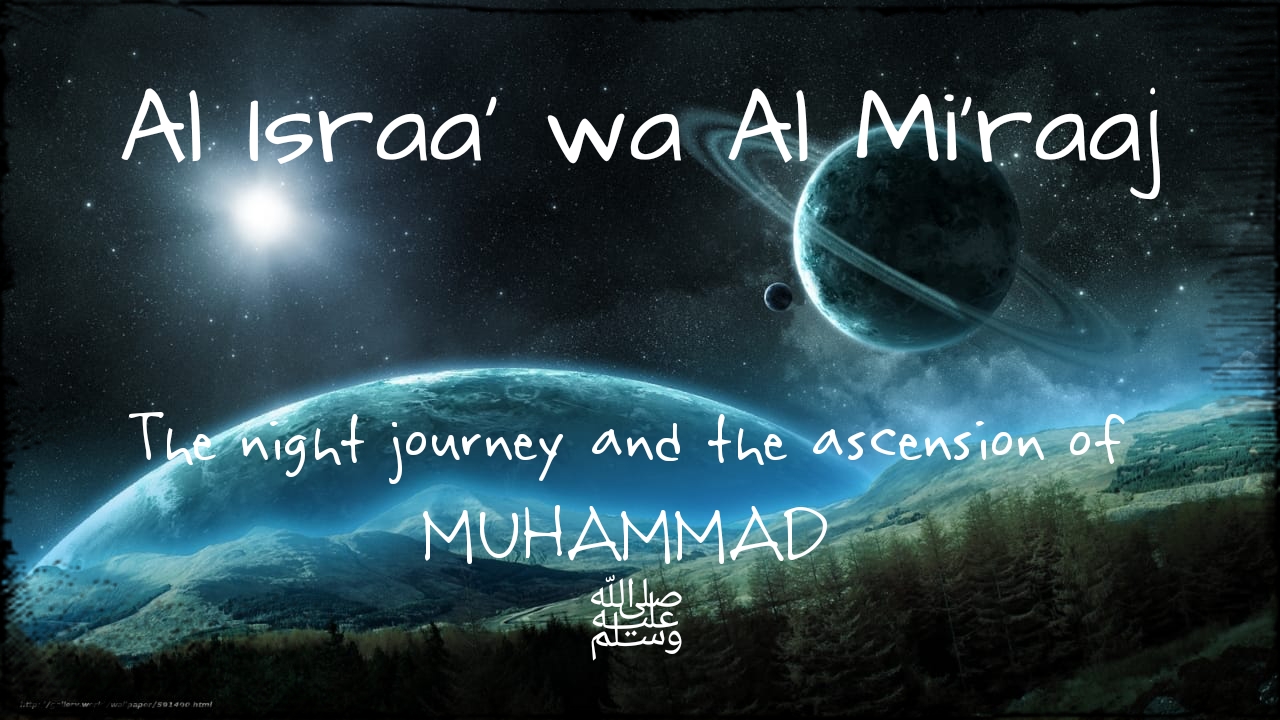 The event of Israa’ and Mi’raaj, translated as ‘The Night Journey and Ascension’ was the night when Prophet Muhammad ﷺ was taken by Jibra’eel (AS) above the seven heavens. This incident was preceded by a couple of sorrowful events in the life of Messenger of Allah ﷺ . He lost his beloved wife Khadijah (RA) and His uncle Abu Talib, his two pillars of support, in the process of spreading the message of Islam. Prior to that, the Quraishites had boycotted him and his followers. Also, when he went to Tai’f in order to call the inhabitants of that city towards the worship of one Supreme God, he was chased out and pelted with stones, eventually bleeding to the extent that his shoes were filled with blood.

It was after all these events, that Allah raised him from the lowest of the low to the highest of the high, above the seven heavens. Angel Jibra’eel (AS) descended and took him to a night journey from Masjid al Haram in Makkah to Masjid al Aqsa in Jerusalem in an instant on an animal called Burraq. He led a prayer of the other prophets present there. This night journey is known as Al Israa’.
In order to refute the people of Quraish who refused to believe in this ‘fairytale’ or ‘chattering of a madman’, the Prophet ﷺ described everything from the landscapes to settlements that one may encounter during weeks and weeks of journey from Makkah to Jerusalem. And he was completely, a hundred percent accurate! How was he able to do so? Obviously, the answer lies in the fact that it was a miraculous journey covered in one night and Allah showed him the visions of the journey in front of his eyes, so he would be able to narrate it all to questioners. As narrated in the hadeeth by Jabir ibn Abdullah (RA) narrrated that the Prophet ﷺ said,

“When the people of Quraish did not believe me (i.e. the story of my Night Journey), I stood up in Al-Hijr and Allah displayed Jerusalem in front of me, and I began describing it to them while I was looking at it.”
[Sahih Bukhari, Vol 5, Book 58, Hadith #226]

Indeed, he was a messenger of Allah ﷻ. Above all, Allah Almighty has informed us Himself about this miraculous journey in the Noble Qur’an,

“Glorified and Exalted be He (above all that (evil) they associate with Him), Who took His slave (Muhammad (blessings and peace of Allah be upon him) for a journey by night from Al-Masjid-al-Haram (at Makkah) to the farthest mosque (in Jerusalem), the neighbourhood whereof We have blessed.”
[al-Isra’ 17:1].

After the prayer at Jerusalem, the Prophet ﷺ was taken in ascension towards the heavens. On each heaven he met the previous prophets, namely Adam, Yahya, Isaa, Yusuf, Idrees, Haarun, Musa and Ibrahim, Alaihum-as-Salaam. He was also granted the opportunity to see Sidratul Muntaha, Bait al Ma’mur, and was given the obligation of five prayers on the same night. This ascension is what is known as Al Mi’raaj.

The complete incident of this miraculous journey and ascension in it is entirety mentioned in Sahih Muslim and Bukhari as reported by Anas Ibn Malik (RA).

The Prophet ﷺ could not get this ascension confirmed by the people of Quraish who then refused to believe him. It is only logically questionable why he would tell a true incident (Al Israa’) and then make up another (Al Mi’raaj). He was the truthful as acknowledged by the same people of Makkah who refused to believe him now. In fact they had disbelieved in the message brought by him, i.e. to worship Allah alone. It was mere transgression against the belief in the miracles of Prophet ﷺ granted by Allah ﷻ.

The Almighty Allah says in the Noble Qur’an in reference to the incident of al Mi’raaj,

“So will you dispute with him over what he saw?
And he certainly saw him in another descent
At the Lote Tree of the Utmost Boundary –
Near it is the Garden of Refuge –
When there covered the Lote Tree that which covered [it].
The sight [of the Prophet] did not swerve, nor did it transgress [its limit].
He certainly saw of the greatest signs of his Lord.” (Surah An-Najm 12-18)

There is no place for any kind of disbelief for the words of Allah wherein He clearly describes what the Prophet ﷺ himself narrated to his companions about the night journey and ascension. Surely, people who refuse this have certainly disbelieved in the words of Allah. And surely they have declared the Prophet ﷺ a liar. The Qur’an and the narrations of the Prophet ﷺ are enough to refute such arguments and it is Allah’s command to believe in the unseen, be it seen only by his Messenger ﷺ, rest of the creation is obliged to believe in it.

0 thoughts on “The Event of Israa’ and Miraaj”