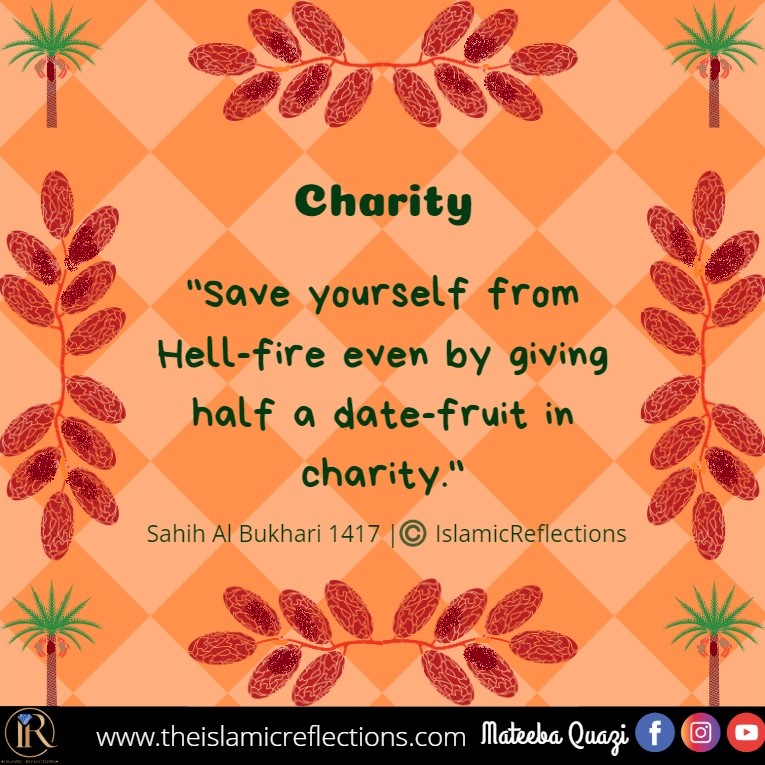 Allah ﷻ sent Prophet Muhammad ﷺ to guide us to the right path and save ourselves from the Hell-fire. One of the ways of doing so is by giving Zakah (charity).

Narrated ‘Adi bin Hatim: he heard the Prophet ﷺ saying, “Save yourself from Hell-fire even by giving half a date-fruit in charity.”

A capable person is required to give Zakah. To show its importance, when the Prophet ﷺ says to give half a date-fruit, it does not mean an actual half date; the sentence emphasises on not delaying it or having it due. It highlights the ease in the ways for giving if a person does not have money at the moment- he can give it in the form of dates, but he should not avoid it.

Giving charity is a pillar of Islam, and it is significant because it cleanses the soul to complete and perfect one’s Islam. If a person fulfils it, his Islam is complete. Undoubtedly, this is an important aim for every Muslim, and every believing Muslim will strive to perfect his faith.

Zakah cleanses the character of the one who gives it so that he is saved from being a miser and is included among the generous. When one accustoms himself to giving, whether it is giving knowledge, wealth, or using his position to help others, that giving will become a characteristic of him and will be part of his nature; such that he will get upset if there is a day when he does not give. Like the hunter who gets used to hunting; if one day he does not hunt, he will be found feeling anxious. Similarly, the one who has gotten used to being generous will feel anxious if he does not give some of his wealth or use his position to help others.

Giving charity gladdens the heart. If a person gives something, especially wealth, he feels a sense of joy. This is something that is tried and tested, but it is subject to the condition that he gives gladly and willingly, not grudgingly.

In conclusion, Zakah is a pillar of Islam and by giving it yearly and on time, one can save himself from the Hell-fire, cleanse his soul, and not get himself attached to worldly materials.