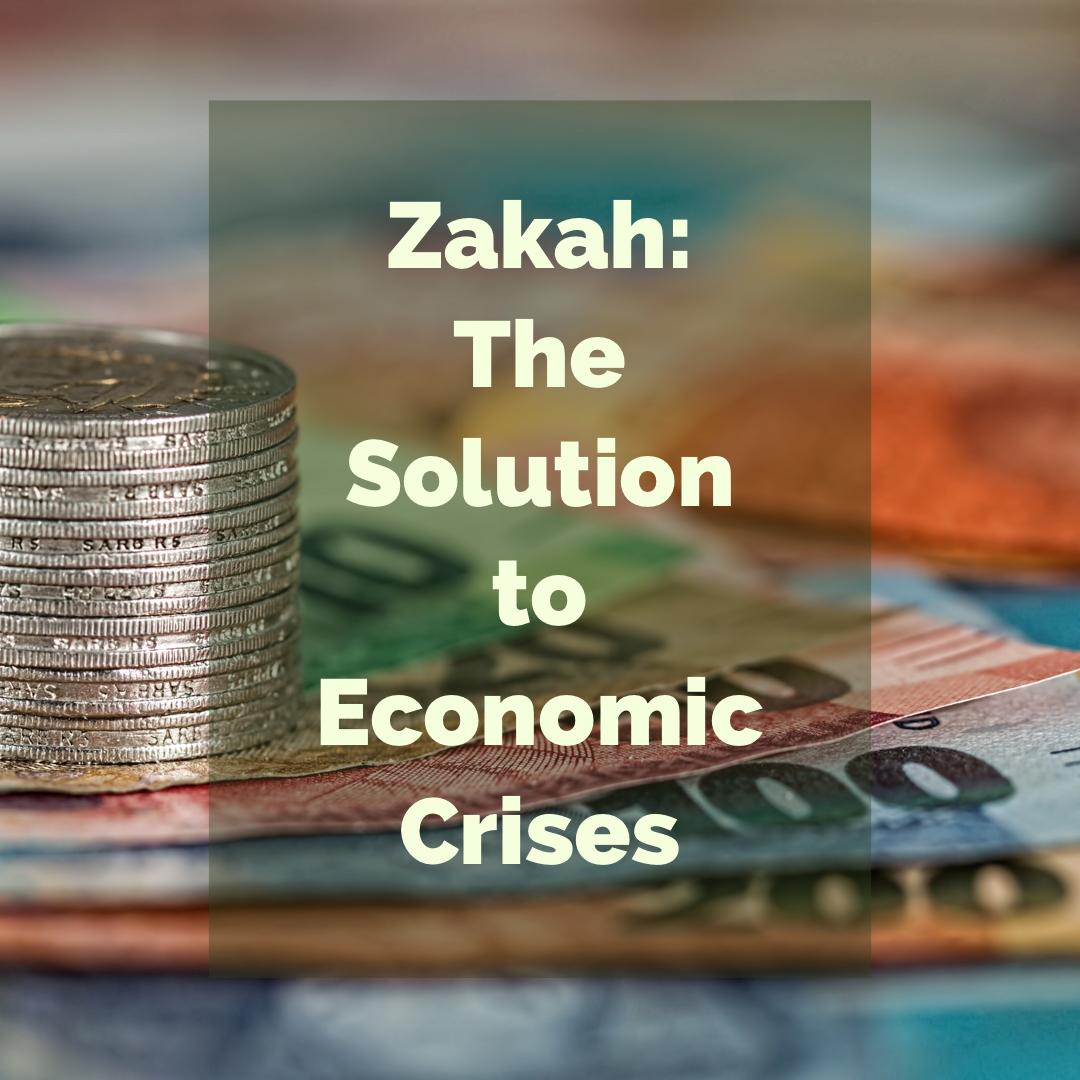 “Indeed, it is [promised] for you not to be hungry therein or be unclothed.”

It is a fact universally acknowledged that the Earth’s resources, although finite, exceed its demand. There is enough wealth to cater to every human being. It is the system of distribution of this wealth that leads to a distressed economy.

There was once a time when the entire Arabian Peninsula experienced complete economic security, and during Umar’s (May Allah be Pleased with Him) caliphate, Muslims even had to resort to travelling in order to find people to pay their Zakah to. Such was the impact of Zakah on the economy.

Economic growth is the increase in a nation’s production of goods and services over a period of time. It hints at a healthy and developing economy, and it can be improved with good education and better technology.

Economic growth leads to economic development, which includes both quantitative and qualitative progress of the country. It indicates a prosperous nation with higher employment, increased per capita income and a better standard of living.

Higher demand for a product leads to an increased need for production. This, in turn, results in companies hiring more employees. Consequently, there is an increase in the number of people earning an income in the country, thus completing the circle- higher the employment, more the people are in a position to purchase, thereby increasing the demand and GDP accordingly.

The Modern Philosophy of Human Life

The modern economic system views human life to be consisting only of a body and mind. The human’s soul and the purpose of its existence have been completely disregarded. Due to this negligence of the soul and its needs, rising on the ladder of success in terms of material possessions has become people’s sole ambition in life. They have been inclined to follow Darwin’s theory of ‘survival of the fittest’, and in pursuit of being the ‘fittest’, they trample the weak ones struggling to hold onto the ladder.

Yes, many do give a hand to the vulnerable ones, but that is all it is-momentary. The occasional funds and donations only support the needy; they don’t pull them out of poverty.

The Islamic Philosophy of Human Life

Contrary to how the modern economic system views human life, Islam implements a balanced approach. It views human life as a combination of the body, mind and soul. While the body and mind relate to the worldly needs of life, the soul connects with the spiritual aspect. Besides aiming for success in the world, people strive to please Allah ﷻ too.

Islam encourages Muslims to achieve success in life. It also tells them that the primary reason for their existence is to worship and please Allah ﷻ. Nothing is ‘owned’ by man; he possesses things only because Allah ﷻ has willed him to, and he will use his possessions in ways Allah ﷻ has allowed him to.

This philosophy trains the human mind to dissociate itself from seeking pleasure solely from materialism, and it makes it easier for man to give charity voluntarily. This also moulds the man in such a beautiful way that when the opportunity arises, he does not give charity to express his pity for the needy, he gives it out of gratitude to Allah ﷻ for having blessed him with good things in life and the ability to perform this obligatory duty.

Likewise, Stephen Koukoulas, an Australian economist, says that economic growth is more likely when wealth is distributed to the poor instead of the rich.

When the wealth is distributed amongst the rich, it circulates amongst the same set of well-earning people, serving little to no benefit to the lower and zero income groups. This brings no significant positive change in the economy.

When the poor don’t own enough wealth to spend, this affects the demand, restricting the growth of the economy.

Influence of Zakah on the Economy

Islam makes eradication of poverty the responsibility of the whole community. Prophet Muhammad ﷺ has said,

“A man is not a believer who fills his stomach while his neighbour is hungry.”

Zakah is one of the ways Islam has provided to alleviate poverty, and its implementation also accomplishes what has been quoted by the Australian economist- equity in wealth distribution.

The idle savings of the rich (which would not have been spent, and which would have had no positive impact on the economy) are transferred to the poor annually. These beneficiaries of Zakah could spend this wealth in many ways. For example, they could use the money to…

In all the above examples, the beneficiaries are finally in a situation where they directly or indirectly boost the economy. In the first case, they may directly or indirectly increase employment and production in the country. In the second, third and fourth cases, with education, good health and development of skills, they are creating opportunities for themselves to earn better and eventually rise above the poverty line to higher social strata. When they do that and, in the due course, gain enough wealth that reaches the Nisab, they will grow to be amongst the people who pay Zakah.

The cycle will continue, and in the long run, the economy will witness significant growth. InshaAllah!

This shows how the meaning of Zakah extends beyond the spiritual and individual purification, to purifying the community as a whole.

Poverty line is determined on the basis of absolute poverty.  ‘Absolute poverty refers to a condition where a person does not have the minimum amount of income needed to meet the minimum requirements for one or more basic living needs over an extended period of time.’ [Source]

The figure above displays the distribution of wealth in the USA, and it proves the imbalance. Over 50% and 90% of the income wealth and financial wealth, respectively, are owned by only 20% of the population. According to further studies, this inequity only worsened during the 1990s.

The U.S. Census Bureau reports that 11.8% of the population (32.3 million people) was in absolute poverty.

According to Ackerman and Alstott’s proposal for a wealth tax to replace the income tax [Wealth Tax Proposal, A & A], the application of a 2% wealth tax on a net worth of over $80,000 would yield a revenue of $378 billion per year. When we merge this principle with the principle of Zakah, 2.5% could result in $472.5 billion per year.

The poverty line income per individual in the USA in 1999 was $8501 per year. The Zakah collection of $472.5 billion when distributed amongst the 32.3 million in poverty would give them each $14,628 a year. Thus, this system not only supports the poor, but also brings them out of poverty, and all in a year’s collection of Zakah.

Despite being one of the most successful countries in terms of economy and technology, the USA still witnesses a significant number of its population in poverty. According to the U.S. Census Bureau’s report, 12.3% of the country was in poverty in 2017.

The situation was worse during Prophet Muhammad ﷺ and his companions’ time, but they effectively eradicated poverty with the implementation of Islamic guidelines. This is a manifestation of humans’ limited intelligence. We can progress and prosper all we want, but the ultimate success in the world, too, is unattainable without obeying Allah ﷻ and having faith in His wisdom.

Although the implementation of Zakah may take time to influence the economy on a larger scale, it is very simple to put into operation. It can be established and integrated with the existing financial system with ease.

Nevertheless, the key to its successful execution lies in good preaching to motivate people to forego their love for worldly possessions, instil empathy in them for their helpless brothers and sisters, and encourage them to participate in this comprehensive pillar of Islam with keenness and devotion.

“The example of those who spend their wealth in the way of Allah is like a seed [of grain] which grows seven spikes; in each spike is a hundred grains. And Allah multiplies [His reward] for whom He wills. And Allah is all-Encompassing and Knowing.”

“Allah destroys interest and gives increase for charities. And Allah does not like every sinning disbeliever.”

Written by: ZSA
Edited by: The Editorial Team
© The Islamic Reflections Blog