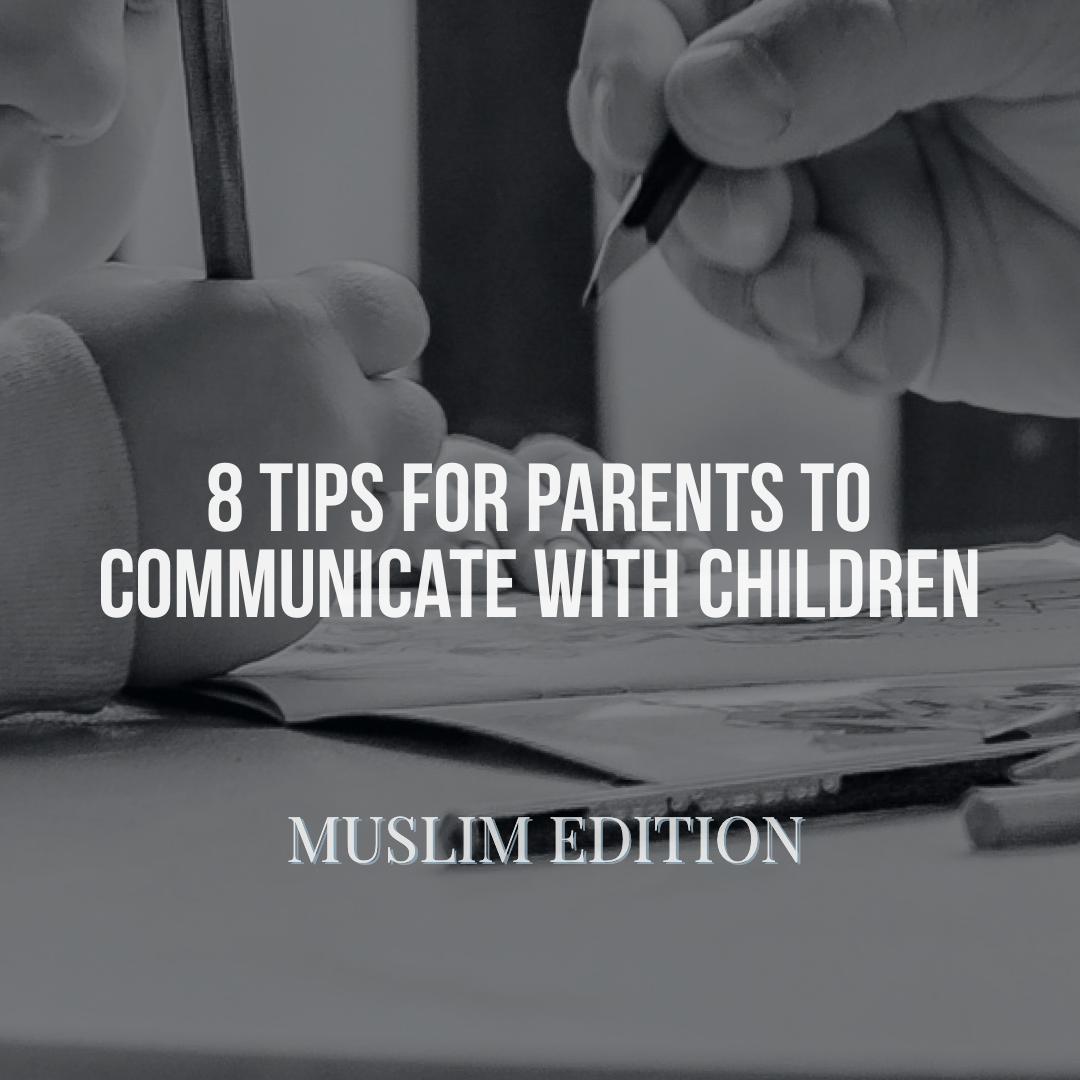 The Messenger of Allah ﷺ said,

Parents are entrusted with the huge responsibility of raising the next generation who are supposed to be physically and psychologically strong enough to face the existing and upcoming challenges. But nowadays, many parents seem very lost; they claim their kids don’t talk to them or even listen to them. To overcome these challenges, this article offers tips with dialogue examples on how to talk to kids so they will listen, and how parents need to listen so that their kids will talk.

Instead of Half-Listening, Listen With Full Attention

All of us find it discouraging to get through to someone who offers only lip service in the name of listening. Even kids find it easier to speak about their troubles to the parent who really listens to them. The good thing about this is that parents don’t have to say anything to encourage a child to talk; a child simply needs a sympathetic listener.

The best way parents can do this is by stopping what they are doing, turning to face their kids, and looking into their eyes while speaking. This way, even small sentences would suffice.

Instead of Questions and Advice, Acknowledge With a Word

Children cannot think clearly or constructively when they are thrown continuously with questions, blames or advice. Follow your child’s lead in the conversation and use simple words like “oh…umm…” or “I see”. These words, when coupled with a caring attitude, make children explore their thoughts and feelings, and possibly come up with their own solutions.

If Abdul loses something, his mom usually puts up so many questions and yells so much that Abdul ends up feeling sad and doesn’t talk to his mom about it. An example of how the conversation can take place is as follows.

Abdul: Somebody stole my pencil.

Abdul: I left it on the desk when I went to the bathroom, and I think somebody took it.

Abdul: This is the third time. From now on, before I leave, I will keep my pencil inside my bag.

Instead of Denying a Feeling, Try to Give the Feeling a Name

Parents usually fear that if they give a name to the feeling, they are just going to make it worse. But the opposite is true, and children, in reality, are deeply comforted to hear simple reasoning for what they are experiencing and to have their inner experiences acknowledged by someone.

When Ayesha cries over her broken doll, by saying things like, “Don’t cry, it’s just a doll. You are being immature,” her parents will just make things worse. They could instead name her feeling by saying, “I know you cared for your doll, and losing it hurts.”

Try to Describe the Problem

Don’t we find it relatively easier to deal with a problem when someone just describes what exactly the problem is? It’s the same with children. When grown-ups describe what the problem is, children are given a chance to tell themselves what to do.

Instead, she could just say, “The light’s on in the bathroom.”

Information is a lot easier to take than an accusation. When children are given apt information, they can usually figure out for themselves what needs to be done.

If Nuha scribbles on the walls, instead of saying, “If I catch you writing on those walls again, you are going to get a spanking!” her father could say, “Walls are not for writing, Nuha. Papers are for writing on. Why don’t you write on those?”

Talk About Your Feelings

Children will not necessarily understand what their parents are feeling, but they are entitled to hear their parents’ honest feelings. Parents should tell their kids how they feel, genuinely without being hurtful.

When Yusuf keeps doing something his father doesn’t like, for example, pulling his sleeves, instead of saying, “Stop it, Yusuf! You are such a pain-in-the-neck!” he should try saying, “I don’t like having my sleeves pulled.”

Show Respect for Your Child’s Struggle

When children struggle through something and parents acknowledge and respect that, children get the courage to see the job through on their own. In this way, parents increase the opportunity for autonomy in kids.

For instance, when Saffiyah is finding it difficult to open a jar of jam, instead of saying, “Give the jar to me,” right away, her mom could say, “A jar can be difficult to open sometimes, try opening it with this spoon.”

Do Not Take Away their Hope

By trying to protect children from disappointment, we prevent them from hoping, striving, dreaming, and sometimes, from achieving their dreams. Instead of disappointment, let them explore and experience.

Riyaz: Maybe I will be an engineer when I grow up.

Mother: With your math grades, forget it.

The mother’s answer is only going to make Riyaz feel disappointed and incompetent. The following answer is a better replacement.

Mother: So, you are considering a career in Engineering! Tell me more about it.

Many times, smacking children will lead to unpleasant outcomes. In that case, talking to them in a way they would listen is essential. The above ideas might help parents while there are many more. Each kid is different, and what works with one kid may not necessarily work for another. It’s the role of parents to identify the techniques that work best with their own kids and apply those.

Maintaining an understanding relationship with kids is the foundation for raising and educating them to fulfil their duties as a Believer. Allah ﷻ says:

“O, you who have believed, protect yourselves and your families from a Fire whose fuel is people and stones, over which are [appointed] angels, harsh and severe; they do not disobey Allah in what He commands them but do what they are commanded.”

4 thoughts on “8 Tips for Parents to Communicate With Children: Muslim Edition”