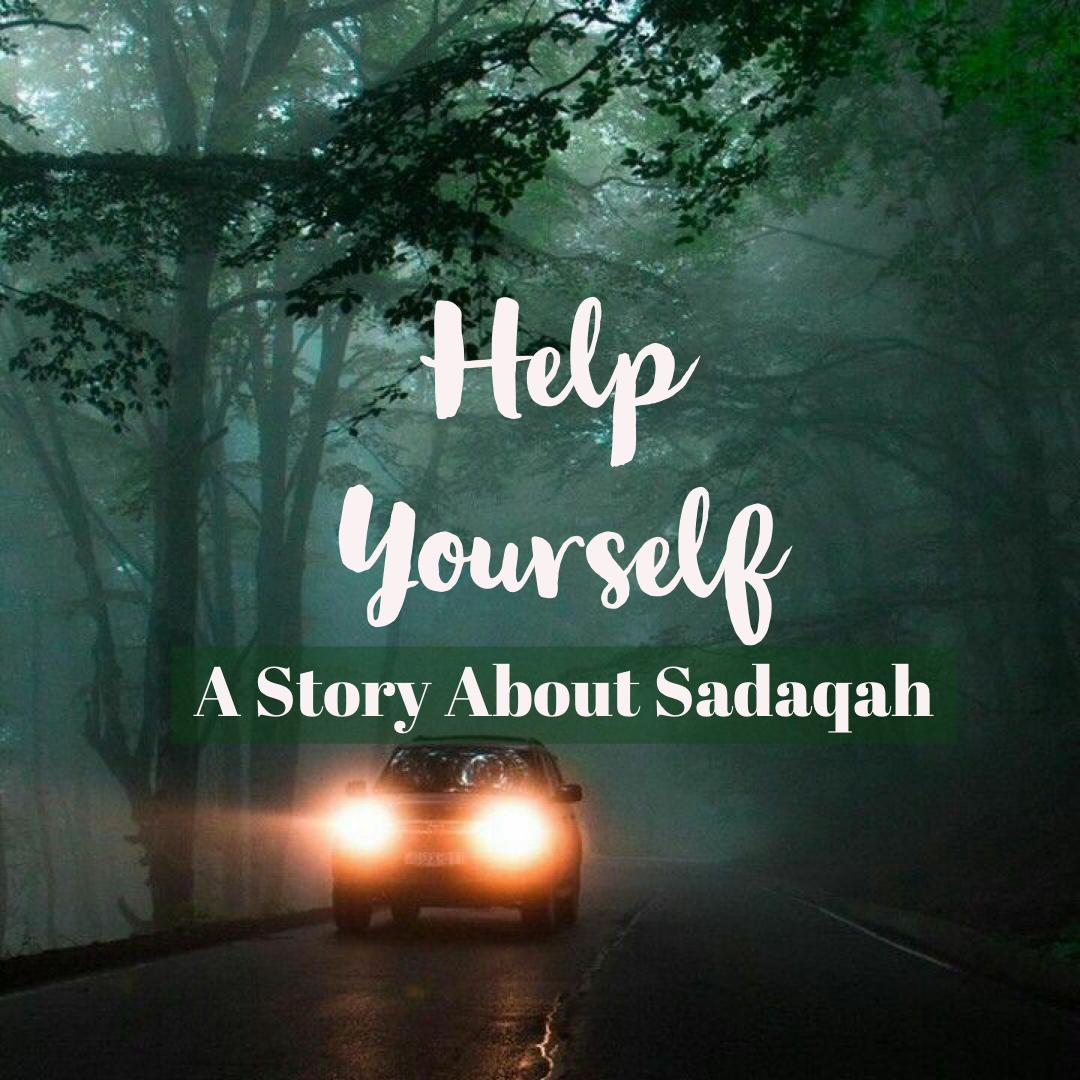 This year, Fatimah’s college had decided to take them to an orphanage. She wasn’t sure about the experiences she would have, but because her best friend was going, she agreed.

For a week, she wondered what she should buy for the kids at the orphanage, and then she decided to ask her father about it.

Her father suggested, “You can give some Sadaqah if you want,” recalling a Hadith he had read in Al-Mu’jam Al-Awsat.

“Umm Salamah (may peace be upon her) reported that the Messenger of Allah ﷺ said: ‘Good works protect from evil fates. Charity in secret extinguishes the wrath of the Lord, maintaining family ties increases life span, and every good deed is charity.’”  (1)

Fatimah listened to him in contemplation, after which she was sure about the things she needed to do.

She went to the store the next day, with her friend, Anisha, to buy some gifts for the kids. They bought everything they had planned. After a good shopping session, they decided to get a cup of coffee. They went to a nearby café, talking along the way.

“Tomorrow, after visiting the orphanage, let’s go out for dinner!” Anisha suggested, sipping her coffee.

Anisha thought for a minute, before she remembered the advertisement she had seen a few days ago about a new branch of Taco Bell. “Garage? Uncle Jamal’s place, right?”

“Well, in that case, let’s try the new Taco Bell there! I heard it’s Halal as well! It’s been ages since we had dinner together,” Anisha’s lips pushed to a pout, making Fatimah laugh before agreeing.

The next day, on their visit to the orphanage, they were accompanied by their professor, Nabeel. Fatimah and Anisha talked excitedly during the entire journey. They speculated about the kids’ reactions at the orphanage.

Upon reaching the place, they took their things and alighted from the bus. The kids were standing near the gate, waiting for their guests. Fatimah smiled, as a small kid, who was probably seven-years-old, gave her a wide-toothed grin, greeting her excitedly.

They sat with the kids and listened to their stories whilst giving out the gifts they had brought for them. Some kids were left at the orphanage door, and some kids were taken in because their families had abandoned them due to some reason or the other.

Fatimah smiled as one of the kids narrated how he wanted to be a superhero and save all the babies in the world.

They cried, they laughed, and they felt humbled.

Sometimes, we need mirrors in life to see reflections, she thought.

On their way back from the orphanage, Fatimah and Anisha went to Uncle Jamal’s garage. It was raining, and thankfully, Anisha had brought her umbrella.

“Today was such an eye-opener! I feel way more humbled. Not having parents around could be so difficult,” Anisha said while saying Alhamdulillah repeatedly.

Fatimah smiled and said Alhamdulillah, too.

“Hey, let’s do this. You get your car and drive to the Taco Bell that’s near Daniel’s store. I’ll catch a bus to the place and place the order in the meantime. I’ll get them packed since it doesn’t look like the rain is going to stop,” Anisha suggested.

Fatimah nodded in agreement that it would save them time. They parted ways at the garage’s entrance and waved each other off.

Fatimah entered and saw Uncle Jamal polishing a car. She greeted him.

The man said he just needed to clean it a bit. He gestured for her to wait inside while he finished.

As she walked towards the corner, she heard a child’s voice. She turned to find a little boy working diligently on his assignment.

She smiled, walking towards him, and asked, “Hey, buddy, what’s going on?”

The little one looked annoyed, but once he saw her, it turned into a smile.

“I’m learning the tables for my lesson. If I don’t do well, the teacher won’t accept me in school.”

Fatimah gave him a puzzled look wondering what that was all about. Just then, Uncle Jamal came in. He told her about the child, his grandson. After his son and daughter-in-law’s death, he was taking care of him. He had tried to raise money for the child’s studies, but couldn’t succeed. So, just to cheer him up, Uncle Jamal told him that only if he completed his old lessons, he could go to school.

Fatimah looked at him with teary eyes. The world was too cruel for this innocent kid. She decided she needed to do something to help him.

She turned towards the kid and asked, “If I get you back to school, will you study hard?”

Uncle Jamal looked perplexed, while the kid responded enthusiastically, “I’ll be a topper, In shaa Allah!”

Fatimah smiled and took out the remaining money she had brought from her savings. She handed it to Uncle Jamal.

“Uncle, get him the books and things he needs for his grade. I think I might be able to make some arrangements for a scholarship. That way, his fees won’t be too much of a burden on you. I know a friend who can manage all this.”

“My child…” Uncle Jamal was at a loss for words. His heart was touched by her action. “I pray to Allah ﷻ that He keep you safe.”

After taking her car and waving goodbye at them, she unlocked her phone and saw that Anisha had called her several times. She had at least a dozen WhatsApp messages asking her to come soon.

Fatimah thought for a while. She recalled a shortcut that could take her straight to Taco Bell. She took a U-turn and made her way while thinking of the happy look on Uncle Jamal’s face. She had given her Sadaqah money to someone who needed it. She knew she had done the right thing. She drove unaware of what was ahead.

She took a turn to the left, and as she drove a little further, she realized that it had been a wrong turn. Worried, she made a U-turn, only to stop abruptly as the road was blocked by a huge branch.

The rain had probably caused it, she thought, furrowing her brows.

She knew she shouldn’t linger at an unknown place, but she couldn’t think of a way out.

As Fatimah tried to jog her memory for a different route, a pair of glaring headlights caught her attention. A speeding truck was approaching her. Alarmed, she tried to get out of the lane, but in doing so, her car hit the branch behind and stopped working. She tried to turn on her headlights so the truck driver could see her, but the key wasn’t turning. Her shivering hands didn’t help her. The speed of the truck was scaring her and her mind had gone numb. It was the first time she was in a situation as terrifying as this.

She ignited the car again and again, but nothing happened. She tried to force the door open, but even that didn’t budge. She hit hard against her window in an attempt to break the glass, but it only hurt her elbow.

The truck’s sound was getting closer, and its lights’ glare was blinding her. She was cold and she could feel her stomach churn in fear.

I’m going to die, she thought. Her mind was not working. She couldn’t think straight.

Her heart was beating faster with every passing moment. The truck was getting nearer and nearer. Fatimah attempted to break the window again, praying that she saves herself. She almost gave up, and braced for impact, clutching tightly to the steering wheel. Then, she heard a cracking sound of a huge branch that rolled down between her and the oncoming truck.

The driver’s headlights caught the leaves of the branch on the road, and he slammed on the brakes hard. The sound of the screeching brakes made Fatimah open her eyes. She was numb with shock. She was alive!

The truck came to a stop.

“Remember, when things are done with good intention, Allah ﷻ will serve you the reward. Giving charity never cuts down on our wealth. Rather, it increases it. It will come back in the form of Rizq, in the form of Duaa, in the form of something we’ll need the most. So, whenever Allah ﷻ increases your wealth, just never stop giving Sadaqah. Keep doing it, and see the happiness of sharing.”

Her father’s words echoed back to her, and she felt herself tear up.

From that day on, she never stopped giving Sadaqah. She gave Sadaqah every now and then. When she could, she would give out money. She would give out food if she was short on money, and she even volunteered for community work when she had neither food nor money.

Sometimes we need trials to understand the beauty of blessings.

Jannah is not easy to get.

We need to work hard for it.

But if deeds are done as guided by the prophet ﷺ,

People will find themselves happy on That Day.

Written by: OwnerOfTajMahal
Edited by: The Editorial Team
© The Islamic Reflections Blog

2 thoughts on “Help Yourself- A Story About Sadaqah”