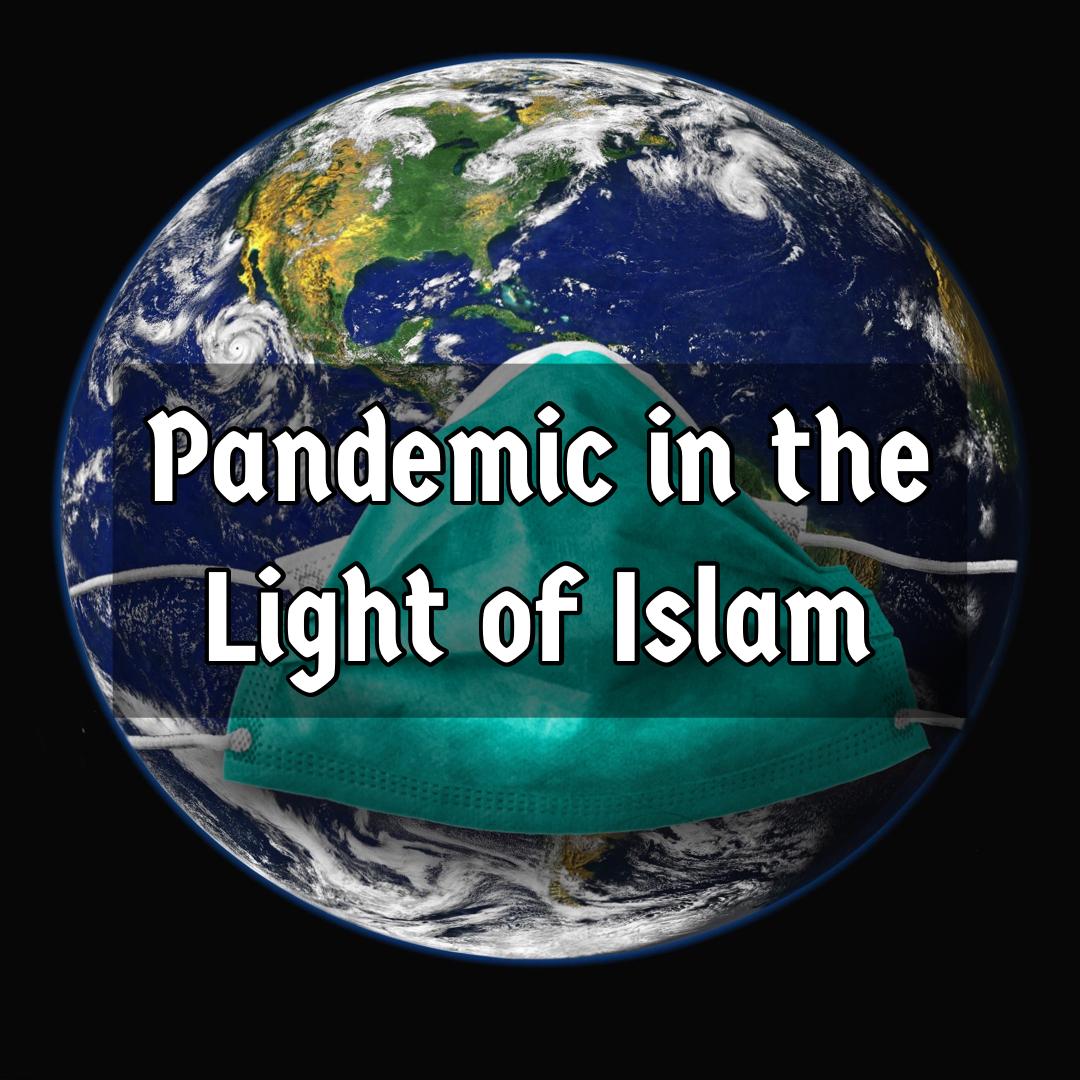 It is an undeniable truth that Islam is not merely a religion, but a comprehensive way of life. It has rules and guidelines that encompass every aspect of human life – social, economic, interpersonal, educational, and many more – for a happy, successful and balanced living ever since it was first spread fourteen hundred years ago in the lands of Arabia. A religion that doesn’t need an upgrade, innovation or reinvention; Islam is the key to leading the best possible life that can be imagined.

Our world is battling the biggest threat of recent times, the Coronavirus or COVID-19, a biological threat that has become a pandemic. Bringing the entire world to a standstill, it has taken thousands of lives so far while many more are still battling for survival. Those that are not infected by this virus are fighting tooth and nail for their safety, and unfortunately, also for the necessities to sustain a normal life.

All this makes one wonder about Islam’s stand in a pandemic like this. Has Islam laid down any guidelines for times like these? Because, surely, when Islam was revealed, there was no such biological threat to mankind in the form of a virus. If Islam is a way of life, then how is one supposed to deal with a pandemic according to it? And if Islam doesn’t cover this aspect of the current world, then how is it a complete way of life?

The answer is ‘Yes’. Indeed, Islam is a complete and comprehensive way of life. The guidelines laid down by the Quran, and by Prophet Muhammad ﷺ through his Sunnah, are as relevant today as they were back then.

According to the guidelines laid down by the WHO, one of the measures to prevent the spread of this disease is by maintaining social distance. This is the reason why the entire world is currently under lockdown, with travel restrictions, and the public is advised to stay home and not attend any kind of congregation.

This is precisely what Prophet Muhammad ﷺ commanded the believers to do in the fourteenth century, in case of a communicable disease. He ﷺ said,

“If you hear of an outbreak of a plague in a land, do not enter it; but if the plague breaks out in a place while you are in it, do not leave that place.”

In another Hadith narration, our beloved Prophet ﷺ said,

“If a person in the time of an epidemic plague stays in their home patiently hoping for God’s reward and believing that nothing will afflict them except what God has written for them, they will get the reward of a martyr.”

Islam is not a religion that burdens its believers and makes things difficult for them. Surely, Allah ﷻ has made praying Salah in a congregation a rewardable deed, but in times of difficulty (like the current pandemic), Muslims are asked to pray in their homes. According to Hadith narrations, at times of extreme rain and storm, Prophet Muhammad ﷺ told the mu’adh-dhin to pronounce the adhan, and say ‘pray at your homes’ at the end of the call. The same concession is valid in the current times of this deadly pandemic.

Following the commands of our Prophet ﷺ not only makes one a responsible citizen of their land but also helps them earn reward from Allah ﷻ, thereby making this a win-win situation for them, both in dunia and akhirah.

One of the most basic and extremely crucial steps to flatten the curve and stop the spread of the coronavirus is maintaining hygiene. We are advised to cover our mouth and nose while sneezing and coughing, and dispose of the used tissues properly. Health officials have advised us to wash our hands thoroughly with soap and water frequently because touching surfaces, our eyes, nose and face could lead to infection.

The above measures are vital to combat this virus. Allah ﷻ made these very measures a part of our religion back when people couldn’t have fathomed that the world would have to face such a fatal virus in the far future.

It is common knowledge for every believer that Allah ﷻ loves purity, so he made cleanliness a part of our faith. This is even more evident as narrated through the Prophet Mohammad ﷺ,

“…in it (mosque) are men who love that they should be purified; and Allah loves those who purify themselves.”

We are commanded to pray our Salah five times a day, which is preceded by mandatory ablution, including which is washing of hands, mouth, face, nose and even our feet, thrice, five times a day. Muslims have been washing and maintaining hygiene since the fourteenth century, something that has now become a necessity for basic survival in 2020.

Abu Hurairah (May Allah be pleased with him) reported that whenever the Prophet ﷺ sneezed, he would cover his mouth with his hand or a piece of cloth, suppressing the sound this way.

Following the Sunnah of our beloved Prophet ﷺ has become crucial for the survival of the whole of mankind. Indeed, Islam is the truest, most comprehensive, and a complete way of life. SubhanAllah!

While most of us are comfortably settled in our houses, having the luxury of cooked food, rations stocked up, clean water for drinking and washing/bathing, and living in clean sanitized homes; there are people who do not have any of this. There are people who sleep out in the open, on pavements, with no roof over their heads, in unhygienic conditions with no medicine, food or water.

When the entire world is under lockdown, and we, as responsible citizens, are staying inside and doing our part in preventing the spread of this fatal disease, where are these destitute people supposed to go? How are they supposed to feed themselves with no daily jobs available anymore? This is where our duty and responsibility as a Muslim arises. We need to give our Zakah and as much Sadaqah as possible to such people. Zakah is fardh upon every Muslim (whose wealth reaches the nisab), and there is absolutely no excuse for such individuals to not help our financially weak brethren. As for Sadaqah, it is not fardh, but Allah ﷻ has made kindness mandatory upon every single believer, and Sadaqah being an act of kindness is an extremely rewarding deed prescribed by Allah ﷻ.

Charity extinguishes sins like water extinguishes fire. Now is the time to spend your abundant wealth in charity and prepare for your life after death.

“…And whoever does good, then surely Allah is responsive, aware.”

By following the commands of Allah ﷻ and helping the poor in such tough times, not only will we earn an enormous amount of reward from Him, but also do our part by paying back to our society, community and country as responsible citizens. Surely, Allah ﷻ has shown us the path and laid down guidelines for every difficulty faced by mankind.

With the continual increase of coronavirus cases, and all the countries practicing quarantine by implementing global lockdowns, people are showing signs of greed and selfishness by putting themselves and their needs ahead and above humanity. The media is filled with such news, showing people panicking and bulk-buying to such an extent that they are hoarding on necessities, leaving almost nothing for others.

Civilized and educated people living in lavish houses, possessing wealth and educational qualifications are behaving like hooligans, fighting like cats and dogs for things like toilet paper, bread and milk. Would Islam ever allow this? Can a true believer act this way, putting his needs before the needs of others? Never.

Islam is a religion that emphasizes kindness, consideration and helpfulness to others.

In a hadith narrated by Anas (May Allah be pleased with him), the Prophet ﷺ said,

This Hadith highlights, in simple words, how important it is for a believer to be considerate of others and their needs. If everyone followed this Hadith of our beloved Prophet ﷺ, there would be no hoarding or a shortage of necessities. Everyone would get their fair share of supplies, without a few buying things in abundance and others left with empty shopping aisles at grocery stores. And this isn’t just one Hadith that emphasizes the importance of being considerate; Islam has promoted the ‘sharing is caring’ culture since its inception.

“A man is not a believer who fills his stomach while his neighbor is hungry.”

If every single person takes into account the depth and importance of this Hadith, and trusts Allah ﷻ, for sustenance is from Him alone, there would be no panic buying, there won’t be fights and thefts at grocery stores, and there would be no hoarding of supplies. There will be peace, ration for all, and humanity and kindness will prevail, In Shaa Allah.

Whatever or however bad the situation may be, Islam is the solution. Death is certain, life is not. This pandemic is a sign that we need to pay importance to our deeds and follow Islam, as not only is it the command of Allah ﷻ but also the need of the hour to survive. So, practice social distancing, stay home, maintain hygiene, and help flatten the curve.

May Allah ﷻ guide us and increase us in our Ibadah, and end this pandemic soon. Aameen.