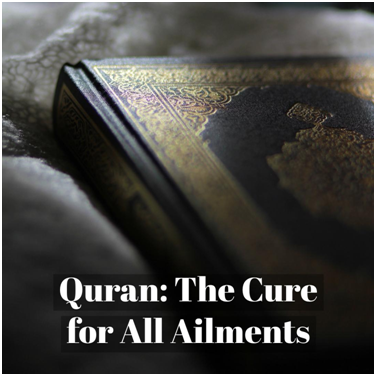 “O mankind, there has come to you instruction from your Lord and healing for what is in the breasts and guidance and mercy for the believers.”

The Quran was sent down as a blessing to mankind. It plays different roles in our lives. It contains blessed words sent by Allah ﷻ for the guidance of both the humans and the jinn. Different themes have been discussed in the Quran, such as the creation of humans, the history of previous nations, the general laws and guidelines to follow in our daily lives regarding inheritance, jihaad, salaat, zakah, and so on. All these topics act as guidance, which helps us to stand firm upon the right path and not go astray.

Hence, Allah ﷻ describes the Quran as a healer, guidance, and mercy for the believers. It is also a cure for what is in our breasts, like doubts and suspicions in our faith, shirk, and filth. It is described as a healer because it removes a number of human ailments. In the tafseer of Ibn Katheer, the Quran is described as an advice from Allah ﷻ, which is also a warning and a shield from shameful deeds. At the same time, it is a guidance and mercy to those who believe.

Therefore, the human ailments mainly described in this verse are those that involve spiritual ailments. Spiritual ailments could be categorized into false beliefs and vile acts and manners, such as evil eye and envy. Contemplating on the verses of the Quran makes one understand his Lord  ﷻ. In return, with Allah’s ﷻ Mercy, the person gets guided to the straight path.

Ruqya al-shar’iyya is a practice that is done according to the Sunnah of the Prophet ﷺ, on people who have different ailments, with the supplication from different verses in the Quran which are specifically for ruqya. Some of these verses include:

An example on the permissibility of ruqya during the time of the Prophet ﷺ can be observed in the following hadith:

“Some of the companions of the Prophet ﷺ passed by some people staying at a place where there was water, and one of those people had been stung by a scorpion. A man from those staying near the water came and said to the companions of the Prophet, ‘Is there anyone among you who can do Ruqya as, near the water, there is a person who has been stung by a scorpion.’ So, one of the Prophet’s ﷺ companions went to him and recited Suratul Fatiha for a sheep as his fees. The patient got cured and the man brought the sheep to his companions who disliked that and said, ‘You have taken wages for reciting Allah’s Book.’ When they arrived at Medina, they said, ‘O Allah’s Messenger ﷺ! (This person) has taken wages for reciting Allah’s Book.’ On that, Allah’s Messenger ﷺ said, ‘You are most entitled to take wages for doing a ruqya with Allah’s Book.’”

It is important, my dear readers, to note that it is better for each one to read upon himself or herself the ruqya despite the fact that another person is permitted to do that for him or her. One should also have faith that whatever ruqya he recites will cure him, bi-idhnillah. There are several acts that are permissible when reading the ruqya. These include:

Although the Quran mainly focuses on the cure of spiritual ailments, it also cures physical ailments. Allah ﷻ says:

“And we send down of the Quran that which is healing and mercy for the believers, but it does not increase the wrongdoers except in loss.”

Allah ﷻ has given us various examples in the Quran which illustrate different fruits that act as a medicine for physical ailments. Let us take the example of honey. Allah ﷻ says:

“And your Lord inspired to the bee, ‘Take for yourself among the mountains, houses, and among the trees and [in] that which they construct. Then eat from all the fruits and follow the ways of your Lord laid down [for you].’ There emerges from their bellies a drink, varying in colours, in which there is healing for people. Indeed in that is a sign for a people who give thought.”

Allah ﷻ also says about Prophet Yunus عليه السلام, describing what happens after he is thrown by the whale to the open shore:

“But We threw him onto the open shore while he was ill. And We caused to grow over him a gourd vine.”

Prophet Yunus عليه السلام was ill when he came out of the belly of the whale and Allah ﷻ made him eat from a gourd vine commonly known as the pumpkin.

Allah ﷻ has bestowed curative powers in natural substances, and He is the cause of healing. Although all medicines are not mentioned in the Quran, Allah ﷻ provides a lot of medical guidance through his Prophet ﷺ. The Prophet ﷺ said, as reported by Jabir رضي الله عنه:

“There is a remedy for every malady, and when the remedy is applied to the disease, it is cured with the permission of Allah, the Exalted and Glorious.” [Sahih Muslim, 2204]

As a brief overview, the Quran guides, educates, and is used for the treatment of human ailments, be it physical or spiritual. It is also of importance for everyone to search for medicines mentioned in the Quran, Sunnah, or any other medical records, provided it does not contain any prohibited element.