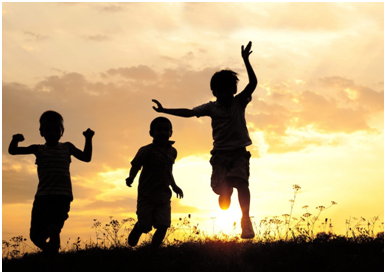 There are three types of Kids mentioned in the Qur’an, and these types are the same ones we have in our world today.
Firstly: Children who are good and obedient from childhood till adulthood.
Let’s look at an example from the Quran :
-The story of Ibraheem (AS) and his son Ismaeel. He was given revelation through a dream to slaughter his son Ismaeel. So he went and told his son. And what was the response of this obedient son?
Let’s have a look at this Ayah :

“And when he attained to working with him, he said: O my son! surely I have seen in a dream that I should sacrifice you; consider then what you see. He said: O my father! do what you are commanded; if Allah please, you will find me of the patient ones.”
(Surah As-Saaffat, Verse 102)
These are the righteous kids.

Secondly: Children who are bad and disobedient from childhood till adulthood.
Let’s look at an example from the Quraan :
-The story of the Son of Nuh (AS). He wasn’t righteous since childhood, and he died unrighteous. Such kids are still present in this world.

“And it moved on with them amid waves like mountains; and Nuh called out to his son, and he was aloof: O my son! embark with us and be not with the unbelievers.”
(Surah Hud, Verse 42)

“He said: I will betake myself for refuge to a mountain that shall protect me from the water. Nuh (AS) said: There is no protector today from Allah’s punishment but He Who has mercy; and a wave intervened between them, so he was of the drowned.”

Thirdly, children who are bad, disobedient, and troublesome during childhood but turn out to be good and obedient during adulthood.
Let’s look at an example from the Quraan:
-Story of the brothers of Yusuf (AS).

“When they said: Certainly Yusuf and his brother are dearer to our father than we, though we are a (stronger) company; most surely our father is in manifest error.”
(Surah Yusuf, Verse 8)
They were jealous towards their younger brother, and they thought their father was in total darkness. If a prophet of Allah was falsely blamed of injustice towards his children, then what about us, who are we?
The children of Yaqub (AS) were very bad to their brother Yusuf, but at the end we see them repenting to Allah and asking for forgiveness from Allah.

Let’s see what the Quraan tells us regarding this story:

“They said: By Allah! now has Allah certainly chosen you over us, and we were certainly sinners.”
(Surah Yusuf, Verse 91)

“He said: (There shall be) no reproof against you this day; Allah may forgive you, and He is the most Merciful of the merciful.”
(Surah Yusuf, Verse 92)

Such kids are also around us – they seem to be bad at first, but then Allah guides them towards righteousness. And this is done by the Mercy of Allah towards His Slaves.
As you sow so shall you reap!

The Messenger of Allah (peace be upon him and his family) has said: “Be good towards your parents and your children will be good towards you.  (And) Look upon the womenfolk of others with purity (in conduct and intention) and your womenfolk will be looked upon with purity.”
[Kanzul `Ummal, Volume 16, Page 466]

This is the Reality!
These three types of kids…either we have them or we are one of them. Just Ponder over it for a minute. May Allah guide us all towards righteousness.
If we are good to our parents then Allah will show mercy to us by our kids being good to us.
As it is said:

The type of reward obtained is according to the type of action.
And it is the quality of that action that matters, not the quantity. Both in this Dunya and the Aakheerah.