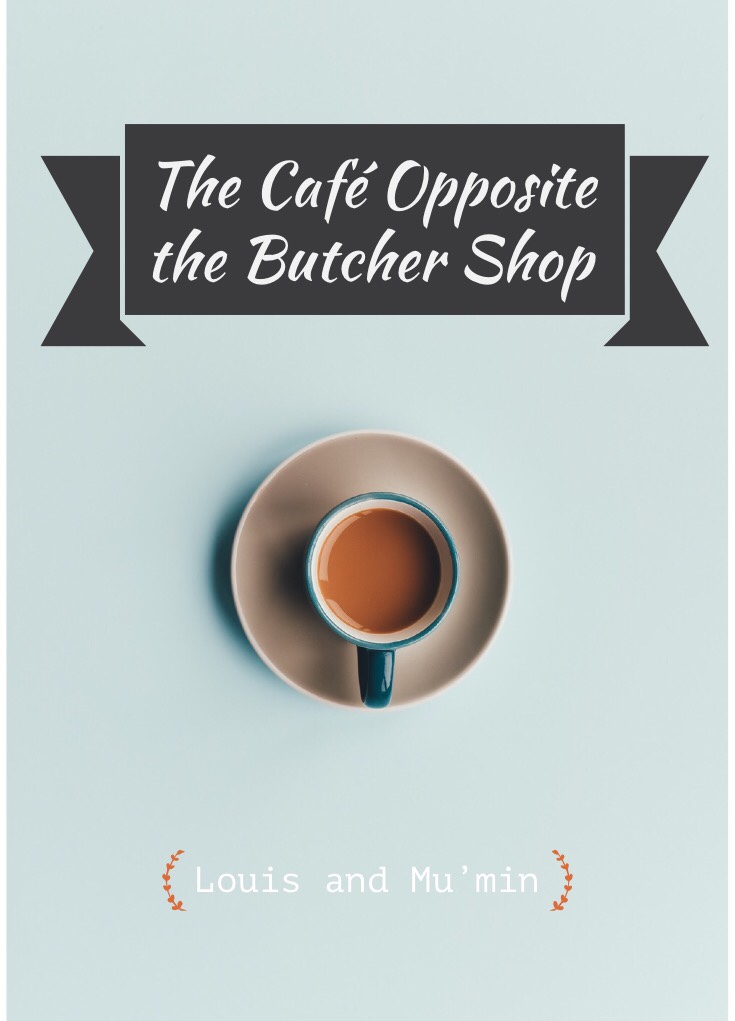 Mu’min enters the newly renovated café and scans the faces around him until he finds the familiar face of Louis.
Mu’min: (settling down) There you are! Assalaamu Alaikum. So did you place an order already?
Louis: …
Mu’min looks up at his friend. Louis appeared to be unaware of his friend’s arrival. His gaze is fixed upon the butcher shop opposite the café. Mu’min clears his throat.
Louis: Oh! You’re here! Wa Alaikum Salaam. Uh, when did you come?
Mu’min: Just about now. What was taking up your attention anyway?
L: (smiles) That butcher shop over there.
M: What about it?
L: I dunno…I was thinking to myself, “Why do they exist?”
Mu’min looks at his friend closely.
Mu’min: (after a brief pause) To systematically chop, pack, and sell meat to consumers?
L: (rolls eyes) C’mon! You know that’s not what I’m talking about!
M: (grins) Well, then tell me what exactly are you talking about. Spell it out for me.
L: (hesitates, then lets out a sigh) I was wondering why do we slaughter innocent animals every year during Eid, when we claim to believe in and worship the Most Merciful One.
The server approaches their table and places the two lattes that Louis had already ordered. Mu’min smiles to himself. Three years of friendship was a long enough time for them to know each other’s preferences. He waits until the server leaves and takes a sip from his latte.
M: What makes you think there is a contradiction between believing in the Most Merciful God and slaughtering animals for consumption?
L: Mu’min, we can survive on plants; we don’t have to kill innocent animals for food anymore. There are alternatives available today.
Mu’min listens intently. For a moment, he sees himself in Louis’ place; curious, worried, and almost panicked, asking similar questions to Prof. Khalid, their sociology professor.
Louis: But now I learn that Islam prescribes Muslims to slaughter animals every year. How is that characteristic of a merciful religion?
Mu’min: Hmm…Well, to begin, Islam permits veganism. You can go vegan and avoid killing animals by not consuming them. You can still be a good Muslim, anyway.
L: But that’s not my point, Mu’min! Going vegan would be my individual preference, one that Islam permits. That does not negate the fact that a major tradition in Islam is to actually slaughter animals.
M: (softly) No, it doesn’t. But that does not necessarily mean killing animals is morally wrong, does it? We kill to live. Be that animals or plants. It’s human. And it’s human to think of whatever benefits us to be morally good.
Louis purses his lips and inhales softly. He wants Mu’min to go on. He wants to listen.
Mu’min: (raising his voice slightly) Eating the meat of domestic animals is established in human history and biology. This is true even for places where plant-based foods would be the staple diet of the time. Meat consumption seemed to be ingrained into human systems. When Islam came, it only enhanced human meat-consumption by establishing a sound, halal process of animal slaughtering. Not doing that would have raised bigger questions upon the authority of Islamic legislations.
The server returns to pick up their now empty cups. Louis has his eyes locked on a spot on the table. Mu’min glances at his friend. Clearly, his mind is racing with questions. Mu’min looks out of the window at the butcher shop. Glimpses of his past is now flashing before his eyes. He knows that Louis will need more time to understand his newly accepted religion better. After all, it’s only been a year since Louis uttered the Shahadah at their hostel room; unlike Mu’min who was born into a Muslim household but left Islam in his early twenties, only to reclaim his faith back after a year-long to-and-fro visits at Prof. Khalid’s office. It wasn’t easy to convince him about the authority of many matters in Islam, particularly those that are controversial, but Prof. Khalid was known for his perseverance.
Louis is still staring at the uninteresting spot on the table. Mu’min returns his gaze towards his friend.
M: Louis, do you remember the story of Prophet Ibrahim A.S. that I told you a month ago?
L: (softly) Yeah…
M: What did you think when we came across the part where Allah commanded Ibrahim A. S. to slaughter his son as a sacrifice?
L: I thought that that was pretty hard on him.
M: (smiles and then continues) And what did you think when Allah removed the son when he actually came under the knife and replaced him with a ram and commanded Ibrahim A. S. to sacrifice it instead?
L: That sounded like a less difficult thing to do.
M: (smiling) Less difficult things are counted as mercy, aren’t they? So, sacrificing animals on Eid is actually a commemoration of a Mercy that was granted to Ibrahim A. S., isn’t it?
L: (quickly) Remembering the sparing of a human by killing more animals?
M: (in a clear voice) Sacrificing His created animals as per His set standards and feeding their meat to less fortunate humans in order to remember His Mercy.
Louis’ face clears a bit. Mu’min knows that this discussion hasn’t ended yet. He wouldn’t let go of Prof. Khalid until he was satisfied with all the answers he received. It was during those times of doubt that his faith wavered, and it’s especially these moments that he worries about the state of Louis’ faith.
Mu’min glances at his phone to check the time. 4:35 PM. Time for ‘Asr prayers. He looks up at Louis, only to find him looking back at him.
L: (getting up) We don’t want to be late for ‘Asr now, do we?
Mu’min lets a big smile slide up his face.

Written by: Aniqa A

0 thoughts on “The Café Opposite the Butcher Shop”