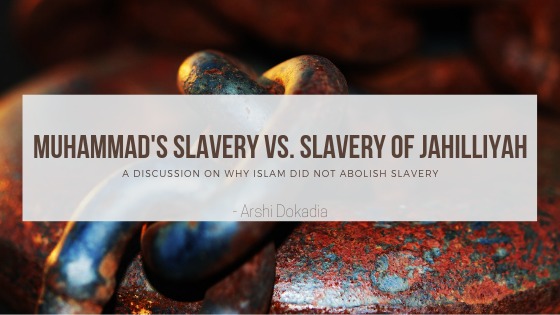 A discussion on why Islam did not abolish slavery

Danielle made a face at the cell phone screen, making her friends Amtullah and Sarah look up from the books they were reading. The three of them had been preparing for their finals. Sarah’s dining table had replaced the library for them. With finals fast approaching, they often ended up discussing the previous classes, often disturbing fellow students in the library.

The other two women exchanged an amused glance from across the table. Amtullah, who was seated next to Danielle gave her a playful nudge, “I thought we were taking a social media break!” She teased her friend, “You know that our Psychopathology professor will not grade us well on an analysis of the current trends of Instagram.”
“No matter how pathological some viral things might seem,” Sarah added with a roll of her eyes.

“Ugh no,” Danielle huffed at the teasing, “I took the phone to check something on SparkNotes – y’know,it is always good to go there, isn’t it?
But see what I stumbled on,” She handed over her phone to Amtullah, “I was reading this article on how Islam actually condones slavery and I find it completely barbaric! And not the article, I find the fact that Islam, the religion of peace -the religion which is the most liberal- just allowed something so barbaric like slavery!”

Sarah smiled wryly. She was a Muslim raised in a Muslim family, but she had encountered the same doubts. The dilemmas took the form of uncertainty about her religion when many non-Muslim acquaintances or even strangers would come and tell her things like these about Islam with the intention to liberate her. So, she was not surprised that a new Muslim like Danielle would have her own share of doubts and ambiguities.

Amtullah began to explain but was interrupted by Sarah.
“Okay, so, we do not have all the facts here,” Sarah said and hesitated for just a split second as Amtullah closed her slightly open mouth and crossed her arms, a hurt look marring her features.

“First of all,” Sarah continued, nonetheless, “Islam affirms that Allah ﷻ created man fully accountable and enjoined duties upon him. His reward and punishment are connected to his free will and choice and no human being has the right to restrict this freedom.”

“Then why…?” Danielle began, but was cut off by Amtullah who raised her hand to stop her, “Let her continue, Dani… she will explain it.”

“Okay, so, as I was saying – slavery was an already established practice across all cultures during the pre-Islamic period and it was deeply rooted in Christianity as well as Judaism – so as this article claims slave trade as‘Islamic or Muslim slave trade,’ She air quoted the words, “would mean that Atlantic slave trade was actually Christian slave trade.”

As Sarah stopped to take a breath, Amtullah added, “Besides, during this time, slavery was horrific –similar to the stories of slavery we read now. What caused slavery, though? Well, it could be attributed to war –which was again, abundant; debts, kidnapping, raids, poverty and need. Islam did not spread slavery, it was spread by kidnapping. And the humongous difference between the rich and the poor. The rich were very rich, with every amenity possible, and the poor, barely surviving.”
“Islam,” Sarah took over as Amtullah took a sip of water, “on the other hand stands against it, there’s a Hadith Qudsi that notes Allah ﷻ said, ‘there are three whose opponent I will be on the Day of Resurrection, and whomever I oppose I will defeat…’ and one of the three was, ‘a man who sold a freeman and consumed his price’ so kidnapping free men and trading them is basically prohibited in Islam.”

“What of slave trade then?” Danielle leaned forward, placing her elbows on the table, and her chin on her palms, eager to glean from her friend’s knowledge, “Why not add a verse somewhere that you have to stop keeping slaves, trading them or obtaining them.”

“It is worth pointing out that you do not find any text in the Qur’an or Sunnah which enjoins taking others as slaves,” Amtullah decided to share her bit, “Whereas, there are dozens of texts in the Qur’an and the ahadeeth of the Messenger ﷺ which call for manumitting slaves and freeing them.”

“Besides, slavery was ingrained deeply in the structure of 7thCentury Arabian society,” Sarah explained. “It was much like gradually banning wine or alcohol. Remember that alcohol was not made haram in one go because in Arabia back then,wine was more common than potable water. Banning slavery would have estranged many of the tribes that needed to be united in Islam. So, there was the next best thing; setting down strict rules for Muslims owning slaves to treat them with dignity and humanity.”
“Apart from limiting the opportunities of acquiring new slaves, there were many rights of slaves – which was unheard of back then,” Sarah continued, “Slaves must not be mistreated or overworked, but had to be treated well. Slaves must be properly maintained. Slaves may take legal action for a breach of these rules and can be freed if the allegations were correct. They may own property and other slaves. Slaves could marry and do business on their owner’s behalf. Slaves guilty of crimes were given half the punishment that would be given to a non-slave (although some schools of Islamic law allow the execution of a slave who commits murder), a female slave was not separated from her child while it is under 7 years old, female slaves could not be forced into prostitution.”

“So, Islam greatly limited those who could be enslaved, and treated them as human beings,” Danielle counted on her fingers, “It banned mistreating the slaves and gave importance to treating them with kindness and compassion… But I still don’t get why exactly it was still allowed.” She ended with mild frustration in her tone. Sarah smiled at her desperation to find the reasoning behind the ruling. Or maybe, it was her frustration to find a counter-argument against critics of Islam.

“The rules actually led to freeing of many slaves,” Amtullah added, “But honestly, we can only make conjectures as to why Allah ﷻ didn’t forbid slavery right away. Or even gradually – but we have to also see things from the perspective of the 7th century, not the 21st Century.”

“Wars were frequent,” She continued, “If the war prisoners were left to their own devices, they would have continued to cause corruption and pose a threat to us. Executing was another option. Enslaving became lesser of the two evils.”

“Besides,” Sarah stressed on her previous point, “It was the practice back then, just like child marriages were. With changing times, it gradually stopped. Almost. And the articles from the modern philanthropists are correct in regards to slavery, but you should remember that while Islam began to treat slaves humanely 1400 years ago, the conscience of the west did not rise until 1953, when United Nations abolished slavery. Before that? The entire renaissance and revolution were built on the corpses of free men enslaved unlawfully and treated inhumanely.”
Danielle pursed her lips, thinking over what she had learned. It was a lot to take in. Sarah remembered the facts and dates. Amtullah made a very passionate case. She could see things from the perspective of her Psychology classes, though. What is the norm of society? What is acceptable? How would you define cruelty? How would you define kindness?

These answers relied severely on the cultural context. She knew that helping a neighbor would be considered kindness in America, but in a collectivistic South-Asian culture, it was a norm, something tobe expected. Similarly, eating dogs was acceptable in China, but PETA was horrified at it.

She understood the point her friends were trying to make. Maybe banning slavery back then would have been like asking to live without the Internet – and yes, many societies did live without Internet but asking modern-day America to do so? Well, it did seem impossible. And if someone suggested the idea right now? They would be ridiculed or just simply ignored.