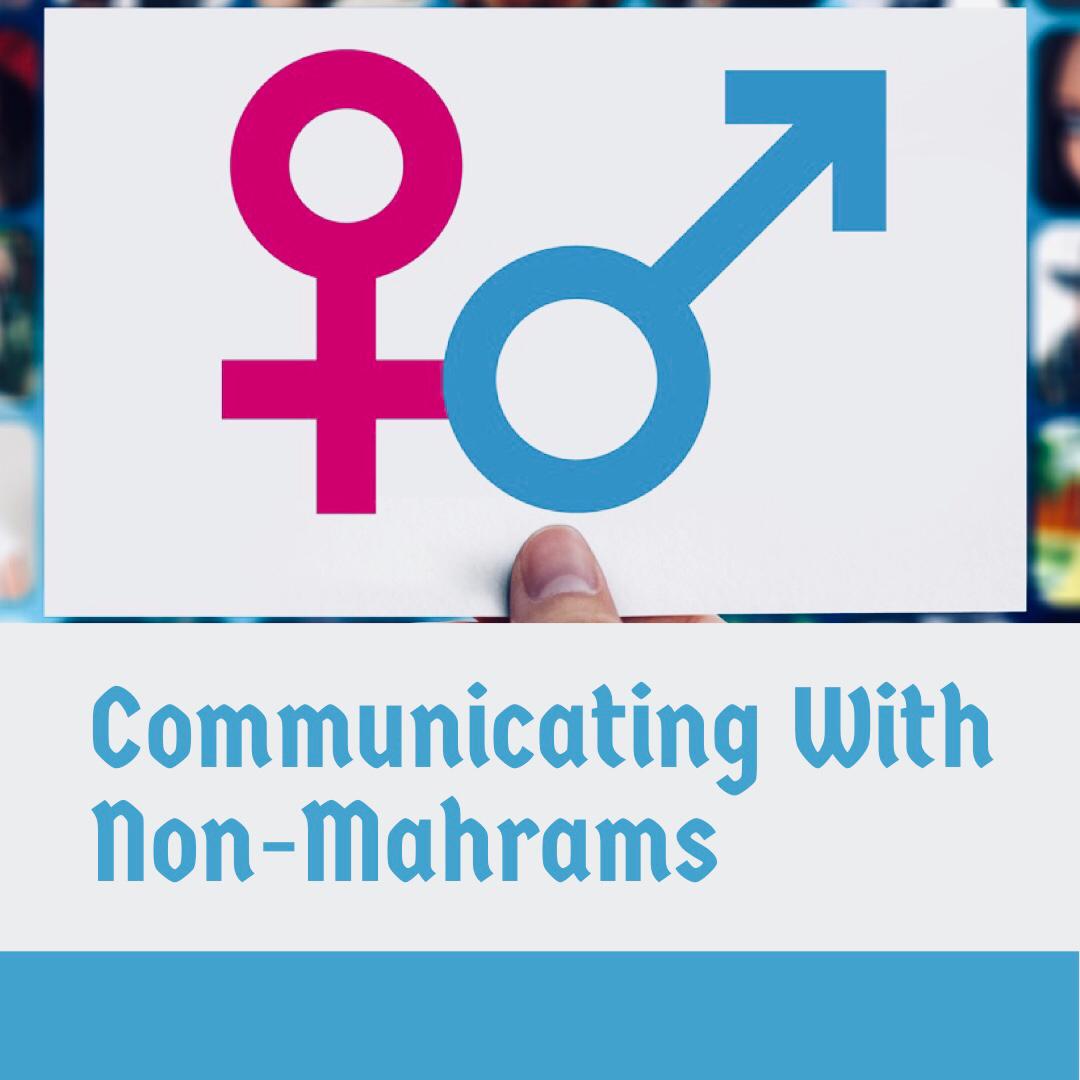 Islam faces many false claims regarding communication between men and women who are not mahram (also referred to as mehram) to each other. In some Muslim communities, people consider that it is completely forbidden for a man to communicate with a non-mahram woman and vice versa. But in reality, there may occur inevitable circumstances where a woman may need to talk to a man and vice versa. One such incident has been illustrated in the Qur’an, where Musa عليه السلام talks to two women who were strangers.

“And when he came to the well of Madyan, he found there a crowd of people watering [their flocks], and he found aside from them two women driving back [their flocks]. He said, “What is your circumstance?” They said, “We do not water until the shepherds dispatch [their flocks]; and our father is an old man.””

This verse and the following verses in Surah Al-Qasas show the conversation that Musa عليه السلام had with the two young women regarding feeding water to the animals.

We are also susceptible to face situations in our daily life where we need to talk to non-mahram men/women, hence we must equip ourselves with knowledge as to how to communicate with the opposite gender.

Knowledge about Mahrams and Non-mahrams:

First and foremost, as Muslims, we should be aware of who our mahrams and non-mahrams are. A woman’s mahram is a person whom she is never permitted to marry because of their close blood relationship (such as her father, grandfather, great-grandfather, etc., and her son, grandson, great-grandson, etc., her paternal and maternal uncles, her brother, brother’s son and sister’s son), or because of radaa’ah or breastfeeding (such as the brother and husband of the woman who breastfed her), or because they are related by marriage (such as the mother’s husband, the husband’s father, grandfather, etc., and the husband’s son, grandson, etc.).

The above picture clearly illustrates the mahram relationships of a female. A woman is permitted to talk freely, be without hijab, etc. only in the presence of her mahram, and it is haraam to do the same in the presence of a non-mahram. It is clearly mentioned in the Qur’an,

Etiquettes to Be Considered When Communicating With a Non-Mahram.

We cannot talk to non-mahrams in the same way we do with mahrams. There are a few etiquettes that need to be followed.

The conversation should pertain only to the topic discussed at hand without branching off unnecessarily. If a needless conversation takes place between non-mahrams, only for fun and enjoyment, then there is no doubt that it is haraam and comes under the heading of the zina of the tongue and ears, of which the Prophet ﷺ spoke when he ﷺ said:

“Verily Allah has fixed the very portion of adultery which a man will indulge in, and which he of necessity must commit. The adultery of the eye is the lustful look, and the adultery of the tongue is the licentious speech, the heart desires and yearns, which the parts may or may not put into effect.”

It is important to avoid joking and laughing. Flirtatious way of communication should also be avoided. The conversation between Musa عليه السلام and the two young women is the ideal example of this from the Qur’an. Musa عليه السلام did converse with non-mahram women, but it was to the point and only regarding the issue of feeding the animals. He didn’t turn away stating that those women were non-mahram, nor did he speak too much or out of topic.

We can also take examples from the life of Sahaabiyatعنهن  رضي الله who used to ask questions to the Prophet Muhammad ﷺ, and how he replied to them. Nobody was more polite and direct than the Prophet ﷺ.

It is better to avoid staring, and lowering the gaze, except after establishing appropriate eye contact.

Both the parties engaging in the conversation should maintain an ordinary tone, and dismiss the use of speech in a soft and gentle manner.

“…do not speak in lowered tones (with a sweet voice) lest he in whose heart is a disease of lust should be moved with desire.  And speak in a befitting manner.”

Avoid disclosing or asking personal information like the whereabouts of the person, physical characteristics such as height, age and so on.

If any or both the parties engage in a conversation that stirs feelings of desire, it is ideal to end the conversation.

For a man to shake hands with a non-mahram woman is haraam and is not permitted at all. The Messenger of Allah ﷺ said: ‘If one of you were to be struck in the head with an iron needle, it would be better for him than if he were to touch a woman he is not allowed to.”

Sometimes, we face situations where we are offered handshakes by non-mahrams and it leaves us in an uncomfortable position. When we are in our workplaces or universities, refusing handshakes could gain a lot of attention. Even our own family members who are ignorant of this would offer handshakes and we stand there awkwardly smiling. We feel that refusing handshakes may hurt the other person. It is not so. We, as Muslims, should be strong in our faith. We won’t offend anybody by going in the path of Allah ﷻ. Here are some tips to handle such a situation.

“O you who have believed, do not follow the footsteps of Satan…”

We very well know that giving into the whisperings of Shaitaan will lead us to do haraam things, and anything that could lead a person to fall into haraam things is also haraam. People falling into adultery, extramarital affairs, office romances, teen relationships and so on originate from intermixing with the opposite gender and engaging in socialization with them. Thus, as Muslims, we should get ourselves acquainted with our limits and behave in the way permissible in Islam, which ultimately is best for us.

5 thoughts on “Communicating with Non-mahrams”